Provisional Polish stamps began appearing in November 1918, just a few days after the end of World War I. 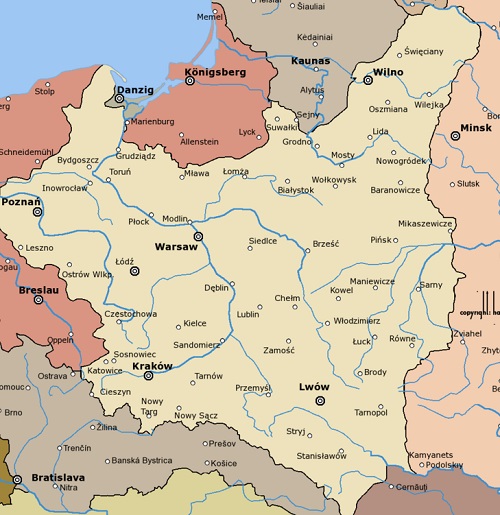 With the collapse of the Russian Empire in 1917, and the dismantling of the Austro-Hungarian Empire, the German Empire, and the Ottoman Empire after World War I, new nations began appearing all over the map of Europe.  The ethnic Polish territories confiscated during the partition of the Kingdom of Poland in the late 18th Century were used to create the new Republic of Poland.

The Republic of Poland's new neighbors were Germany, Czechoslovakia, the Free City of Danzig, Latvia, Lithuania, the Union of Soviet Socialist Republics, and Romania.  By 1938,  the Republic of Poland was Europe's 6th largest country, and it was one of Europe's major economic powers.

In 1918, two currencies were in simultaneous use in the Republic of Poland.  The Northern areas used the Marka (100 Fenigi = 1 Marka), originally based on the German Mark.  The Southern areas used the Korona (100 Halerzy = 1 Korona), originally based on the Austrian Krone (Crown).  In 1924, a single currency, the Zloty (100 Groszy = 1 Zloty), was introduced, and it is still in use today.

Many of the overprinted Polish stamps shown on this page exist with inverted overprints and surcharges.  They can be a bit pricey, but they are all readily available in the philatelic marketplace. 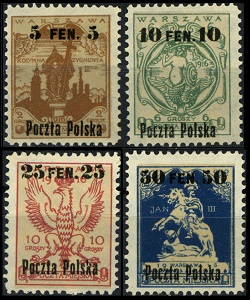 The four pictorial local stamps of Warsaw, shown above, were overprinted and revalued, as regular definitive Polish stamps, on November 17, 1918, six days after the armistice, ending World War I.  The overprint reads Poczta Polska (Polish Postal Service), and the revaluation amounts are denominated in Polish FENIG.

Their catalog attributes and designs are as follows: 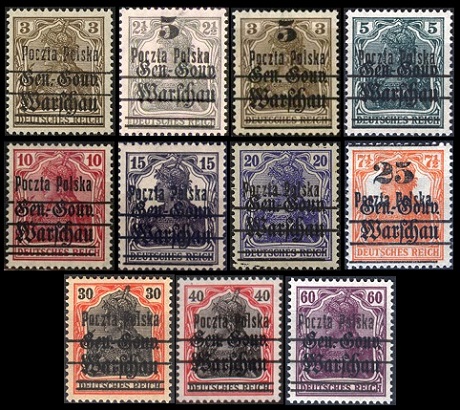 The eleven German occupation of Warsaw stamps, shown above, were overprinted Poczta Polska  and / or revalued in 1918 and 1919.  These stamps are denominated in German Pfennig.

The three Austrian Empire military charity stamps of 1918, shown above, were overprinted, as regular definitive Polish stamps for Lublin, on December 5, 1918.  The overprint contains POLSKA POCZTA and a black obliterator with the Polish coat of arms. These stamps are denominated in Austrian Heller. 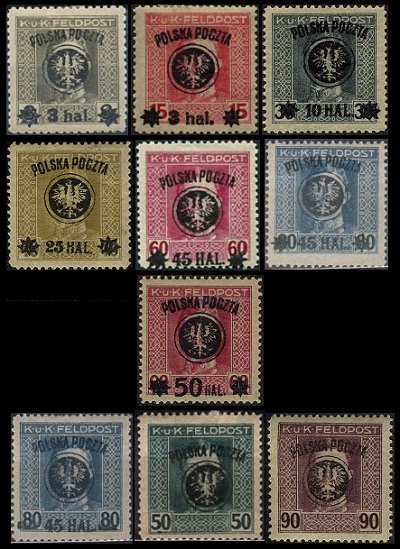 The ten Austrian Empire military stamps of 1918, shown above, were overprinted and revalued, as regular definitive stamps for Lublin, during 1918 and 1919.  The overprint contains POLSKA POCZTA and a black obliterator with the Polish coat of arms. On these stamps, the revaluation amounts are denominated in Polish Halerzy. 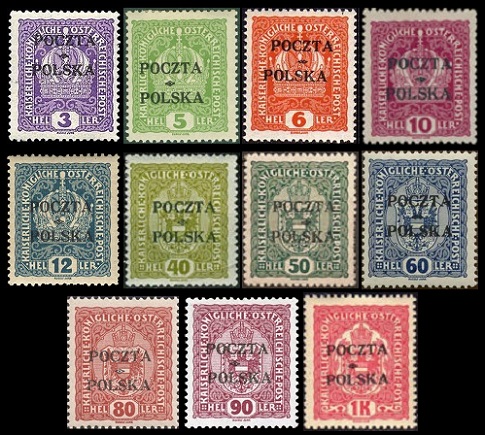 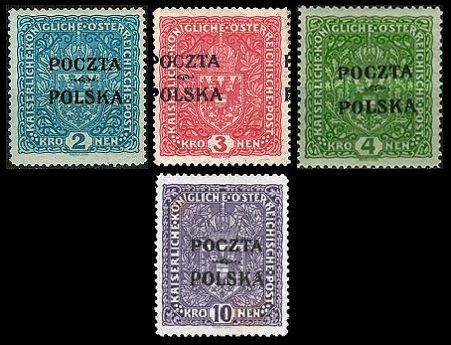 The nineteen Austrian Empire definitive stamps of 1916 to 1919, shown above, were overprinted, as regular definitive stamps for Cracow, on January 17, 1919.  The overprint contains POLSKA / POCZTA, with a small ornament in the middle. These stamps are denominated in Austrian Heller and Kronen.

This is a very high priced set, with a number of the denominations ranging from scarce to very rare.  Extreme caution should be exercised, when buying these Cracow stamps. 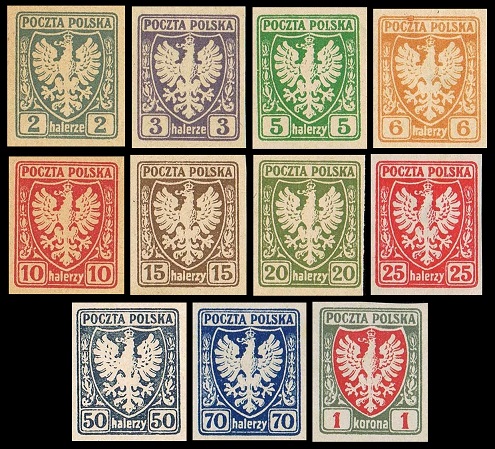 The first printed definitive Polish stamps, shown above, were issued in Cracow on February 25, 1919.  These stamps are all denominated in Polish Halerzy or Korona.  They were issued imperforate, and they were printed on yellowish or bluish paper without gum.

The designs of these stamps feature the Polish coat of arms.

Many of these Polish stamps are frequently seen with privately applied perforations. 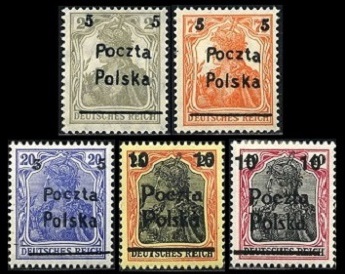 The five German definitive stamps, shown above, were overprinted and re-valued, as regular definitive Polish stamps for Poznan, on August 5, 1919.  On these stamps, the re-valuation amounts are denominated in German Pfennig.

The two German definitive stamps shown above were re-valued on September 15, 1919 for provisional use in Gniezno (Sc. #77-78).  These stamps are denominated in German Pfennig.

Forgeries of these two surcharges are plentiful.  Only certified examples should be purchased!