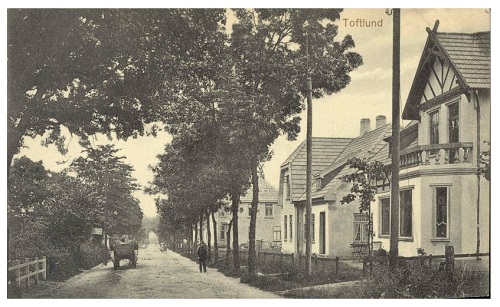 Totlund, Schleswig in 1910
From an old Postcard

The Schleswig plebiscite was actually two referendums, organized according to the Treaty of Versailles in 1919, with the purpose of determining the future border between Germany and Denmark. The referendums were monitored by representatives from France, the United Kingdom, Norway, and Sweden.

After World War I, the Danish, who were neutral during the war, divided the province into three zones, in which separate referendums would be held.

Zone I - encompassed the northern and largest part of Schleswig. Zone I was about 75% ethnic Danish and 25% ethnic Germans, but some towns in the zone did have majority ethnic German populations. The referendum for Zone I was held on February 10, 1920, and it voted to become part of Denmark, today, the Danish Province of South Jutland.

Zone II - was formed from the central part of the province. Zone II was about 80% ethnic German and 20% ethnic Danish. The referendum for Zone II was held on March 14, 1920, and it voted to remain part of Germany.

Zone III - was the southernmost part of the province, and it was almost entirely ethnic German. No referendum was held in Zone III, as the outcome was obvious.

Through these referendums, Denmark was able to reclaim a substantial portion of the province that they had lost to Prussia in 1864. The outcome of the referendums was peaceful, and the border between Denmark and Germany that was established in 1920 remains to this day. 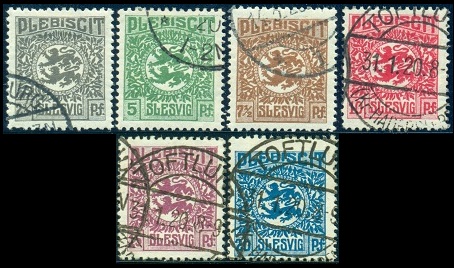 The fourteen stamps shown above (Mi. #1-14, Sc. #1-14) were issued in January 1920 to publicize the upcoming Schleswig plebiscites. The stamps depict the Arms of Schleswig on the lower denominations and a pastoral scene on the high denominations. The legends are in Danish, consisting of "PLEBISCIT and SLESVIG", but the stamps are denominated in German Pfennig and Marks.

In May 1920, after the conclusion of the two plebiscites, an identical set of stamps was issued (Mi. #15-28, Sc. #15-280) for use in the now Danish Zone I. They were overprinted "1. ZONE" and the stamps were now denominated in Danish Øre and Kroner.