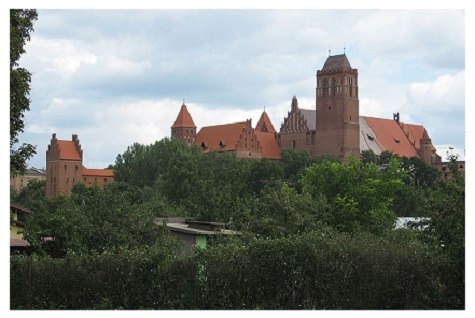 Kwidzyn Castle and Cathedral
By: Pko -- From: Wikipedia

The plebiscite for the Marienwerder District was held on July 11, 1920.

The name Marienwerder, in German, literally means "Mary's Little Island". The town was founded in the 14th Century by the Teutonic Knights and was used as the seat of the Bishops of Pomerania within Prussia.

Following World War I, the Marienwerder District, southeast of Danzig, was disputed between the new Second Republic of Poland and the German Weimar Republic. Marienwerder was the capital of the district, which also included the urban districts of Graudenz (Grudziądz) and Thorn (Toruń) before 1920. Rural districts in the region included Briesen, Kulm, Deutsch-Krone, Flatow, Graudenz, Konitz, Löbau, Rosenberg, Schlochau (Człuchów), Schwetz, Strasburg, Stuhm, Thorn, and Tuchel. 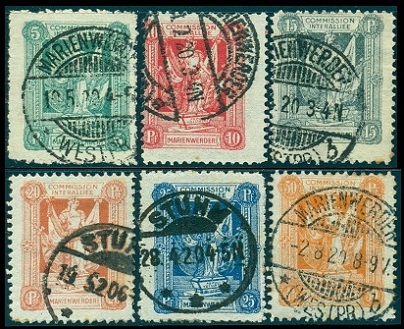 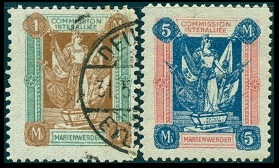 Between March and May of 1920, a series of fourteen postage stamps, ranging in denominations from 5 Pf. through 5 Mk., was issued to publicize the upcoming referendum. Eight of them are shown in the images above (Mi. #1-14, Sc. #1-14).

The new stamps were inscribed "COMMISSION / INTERALLIEE", OR "Allied Commission" at the top and "MARIENWERDER" at the bottom. The designs featured an allegorical figure representing the Allied Commission, flanked by the flags of the Allied nations.

For the specialist, these stamps come in four varieties.

The 1 Mk. denomination stamp is also known with larger overprints in capital letters (Mi. #21). These are considered "essays" and are very expensive.

All of these definitive stamp overprints exist in various types, varieties, and with the overprints doubled or inverted. See the Michel specialized catalog for details.

In July 1920, the fourteen values of the Allied Commission definitive set were again issued (Mi. 30-43, Sc. #40-53). These stamps are identical to the previous issue, except that the inscriptions now read "PLEBISCITE" at the top and "MARIENWERDER / KWIDZYN" at the bottom. An example of the 2 Mk. denomination stamp is shown above.

In the plebiscite, more than 93% of the electorate voted to join Germany, and as a result, the Marienwerder District became part of the Weimar Republic.