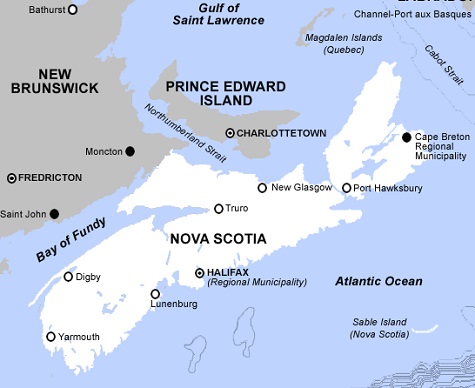 Originally the home of the Mi’kmaq people, the French arrived in 1604 and established settlements there.  The new French colony included present day New Brunswick, Nova Scotia, and Prince Edward Island, and they named it "Acadia".  The British conquered Acadia in 1710, naming the former French colony "Nova Scotia".  By 1784, present day New Brunswick and Prince Edward Island had been divided into separate British Crown Colonies.  The original French-speaking populations were eventually replaced by English-speaking planters and empire loyalists from New England during the time of the American War of Independence.

All Crown Colony of Nova Scotia stamps feature either a portrait of Queen Victoria or a Crown and Heraldic Emblems.

The first stamps of Nova Scotia, issued between 1851 and 1857, featured a square denomination and three diamond-shaped denominations.  The major types are shown above.  These stamps are imperforate, and they are printed on bluish-tinted paper.

Reprints exist of these first stamps of Nova Scotia.  They are printed in un-issued colors and on thin, hard, white paper.

Nova Scotia issued their first decimal currency stamps beginning in 1860.  These new stamp designs are perforated 12, and they are all printed on either white or yellowish-tinted paper.