These Norwegian stamps are regular definitive and commemorative postage stamps, but they have a "value added tax" or "surtax" on them, designed to raise money for national organizations, public events, and public charities.  In some catalogs, they are referred to as "Semi-Postal stamps".  In this category, they will be referred to as "Charity stamps". 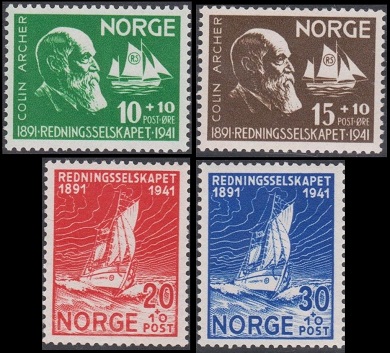 The Norwegian Lifeboat Society or the Norwegian Society for Sea Rescue was founded in 1891, with the purpose of saving lives and property at sea.  The first rescue boat was built by Colin Archer (1832-1921), the Norwegian naval architect and shipbuilder.  The rescue boat, called the Colin Archer, was placed into use in 1893, and in 1894, it was used to save thirty-seven lives in a storm off the coast of Finnmark in the extreme northeastern part of Norway.

The three politically-motivated surtaxed postage stamps of Norway shown above (Sc. #B25-B27) were issued between February and September 1942 to promote Vidkun Quisling, to celebrate the Inauguration of Quisling as Minister-President on February 1, 1942, and to publicize the Annual Convention of Quisling's party, the Nasjonal Samling (National Socialist Party) on September 25, 1942.

The surtaxes were for the benefit of the relatives of soldiers killed in action.

Vidkun Quisling (1887-1945) was the nominal head-of-government of Norway, following the German occupation during World War II.  From 1942 to 1945, he was the Minister-President of Norway, ruling jointly with the German Civilian Administrator, Josef Terboven (1898-1945).  He was a strong supporter of Adolf Hitler, and he participated in the Final Solution for the Jewish population of Europe by constructing concentration camps for them in Norway.  After the restoration of the legitimate government of Norway at the end of World War II, Quisling was tried for murder and for high treason against the Norwegian state, and he was sentenced to death.  He was executed on October 24, 1945.

The word "quisling" has since become a derogatory term, meaning "traitor" or "collaborator". 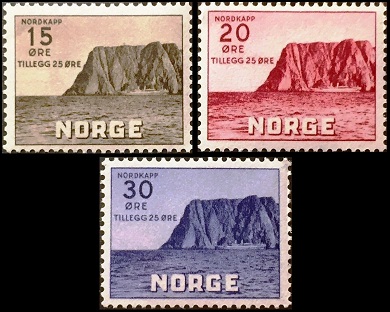 The three surtaxed North-Cape-type stamps shown above (Sc. #B28-B30) were issued on April 1, 1943.  These stamps are perforated 13, and their size is 27 x 21 mm.  The surtax benefited the Tourist Association. 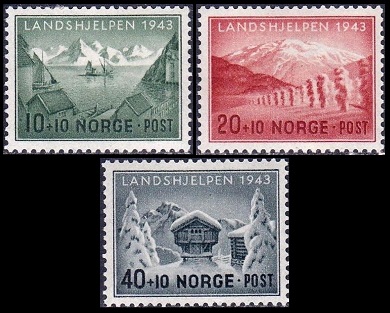 The three surtaxed pictorial Norwegian stamps shown above (Sc. #B32-B34) were issued on November 10, 1943.  The surtax was for National Welfare (Winter Relief).

The three designs feature a fishing village, grain drying, and a barn in winter. 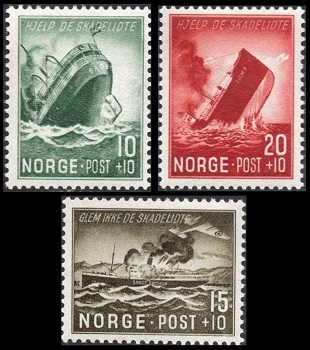 The three surtaxed pictorial Norwegian stamps shown above (Sc. #B35-B37) were issued on May 20, 1944.  The surtax benefited the victims of wartime ship sinkings and their families.

The three designs feature the "Baroy" Sinking, the "Irma" sinking, and the "Sanct Svithun" being attacked by a British aircraft.  The stamps are inscribed either "Help the Victims" or "Do Not Forget the Victims" in Norwegian. 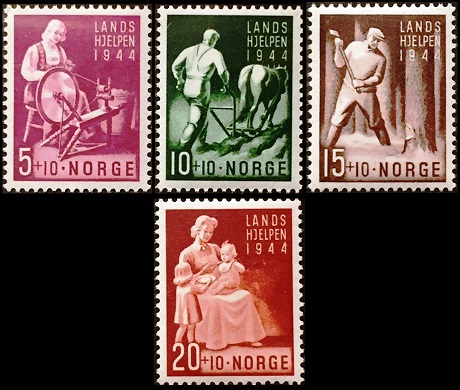 The four surtaxed pictorial Norwegian stamps shown above (Sc. #B38-B41) were issued on December 1, 1944.  The surtax was for National Welfare (Winter Relief). 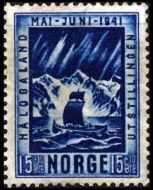 The 15 Ø. + 10
Ø. denomination stamp shown above (Sc. #B19) was issued on May 16, 1941 to publicize the Haalogaland Exposition.  The surtax benefited families of lost fishermen.

The design features a Viking longboat near the Lofoten Islands. 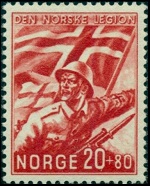 The design features a legionary with Norwegian and Finnish flags behind him.

The Norwegian Legion was formed by the German Waffen-SS in 1941.  Though they were originally supposed to be deployed in Finland, most of the legionaries wound up fighting in the Siege of Leningrad during World War II.  The legion was disbanded in March 1943. 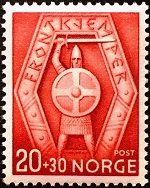 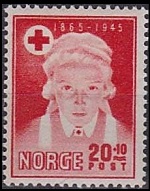