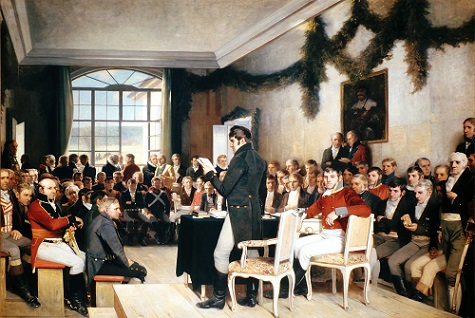 Commemorative Norwegian stamps were first issued in 1914.  The big event of 1914 was the Centenary of Norway's Constitution and the dissolution of their four-hundred-year relationship with the Kingdom of Denmark.

Though Norway has an illustrious history, dating back to before the Viking Age, their output of commemorative stamps has been relatively conservative.  During the twenty year period from 1914 to 1934, the Norwegian postal service only issued thirty commemorative stamps for seven special events. 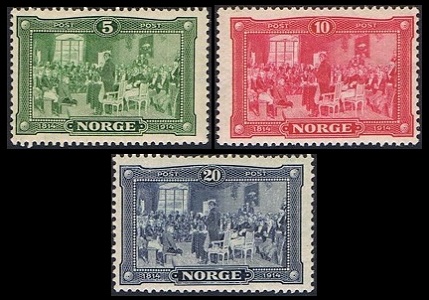 The three pictorial commemorative Norwegian stamps shown above (Sc. #96-98) were issued on May 10, 1914 to celebrate the 100th Anniversary of the Constitutional Assembly at Eidsvoll.

The common design of these three commemorative stamps shows the painting featured at the top of this page.

The Constitutional Assembly, also called the Constituent Assembly or the National Assembly, was held at Eidsvoll in April and May of 1814, in the aftermath of the Napoleonic Wars.  The assembly established the Norwegian Constitution and formalized the dissolution of Norway's union with the Kingdom of Denmark.  Norway had been part of the nation of Denmark-Norway since the 16th Century.  During the Napoleonic Wars, the nation of Denmark-Norway had been allied with France.

The anniversary of the Norwegian constitution is now a national holiday, and May 10 is celebrated as National Day in Norway each year. 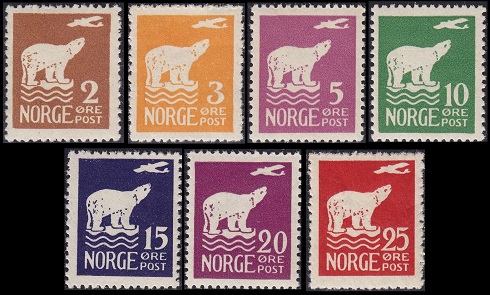 The seven pictorial stamps shown above (Sc. #104-110) were issued on April 1, 1925 to publicize the Flight of Roald Amundsen to the North Pole.   The proceeds from the sale of these special stamps were used to finance Amundsen's polar flight.

The common designs of these stamps feature a polar bear, standing on an ice-flow and gazing upward at a passing airplane.

Roald Amundsen (1872-1928), the famous Norwegian polar explorer, is recognized as the first person ever to reach both poles, both by land and by air.  He was also the leader of the first expedition to traverse the Northwest Passage.  Amundsen perished, during an Arctic rescue mission, in 1928.

The inscription "SVALBARD / 1925" was added at the top of these contemporary Lion-Rampant-type stamps.

Svalbard is a polar archipelago discovered by William Barents in 1596.  The Svalbard Treaty of 1925 transferred sovereignty over the islands from the Soviet Union to Norway, provided that the islands would not be used for warlike activities and that all the signatories had right to operate coal mines there.

Henrik Ibsen (1828-1906), the World famous Norwegian playwright and poet, is considered the founder of realism and one of the founding fathers of theatrical realism.  He has been the most frequently performed dramatists in history, after William Shakespeare.  Though he wrote in Danish, most of his plays take place in Norway, often in locations reminiscent of Skein, the port town where he grew up.

The four portrait Norwegian stamps shown above (Sc. #145-148) were issued on March 20, 1928 to commemorate the 100th Anniversary of the Death of Niels Henrik Abel.

Niels Henrik Abel (1802-1829) was a Norwegian mathematician.  His accomplishments were largely unknown, during his lifetime, and he died at the age of twenty-six, while living in poverty.  The Abel Prize in Mathematics, originally proposed to compliment the Nobel Prizes, is named in his honor. 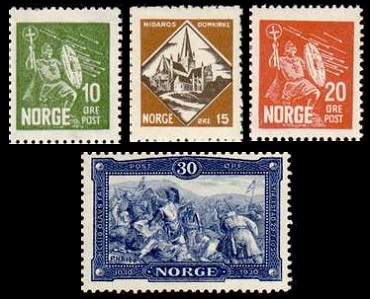 The four pictorial Norwegian stamps shown above (Sc. #150-153) were issued on April 1, 1930 to commemorate the 900th Anniversary of the Death of King Olaf Haraldsson.

The period of his reign has historically been accredited as being the beginning of the introduction of Christianity into Norway.  Olaf Haraldsson was canonized, in Norway, in 1031, a year after his death, and his canonization was confirmed by Pope Alexander III (1100-1181) in 1164.  He is considered a saint by both the Roman Catholic Church and the Eastern Orthodox Church, and he is also the Patron Saint of Norway.

The four portrait Norwegian stamps shown above (Sc. #154-157) were issued on December 8, 1932 to commemorate the 100th Anniversary of the Birth of Björnstjerne Björnson.

Björnstjerne Björnson (1832-1910) was a Norwegian novelist, poet, and dramatist.  He won the Nobel Prize in Literature in 1903, becoming the first Norwegian Nobel laureate.  The lyrics to the Norwegian national anthem are based on one of his poems.

The four portrait Norwegian stamps shown above (Sc. #158-161) were issued on November 23, 1934 to commemorate the 250th Anniversary of the Birth of Ludvig Holberg.

Ludvig Holberg (1684-1754) was a Danish-Norwegian writer, essayist, philosopher, historian, and playwright.  He is considered the founder of modern Danish and Norwegian literature.