For Newfoundland stamps, the big event of 1937 was the coronation of King George V and Queen Elizabeth.  During the time period from 1937 to 1947, with the accession of a new monarch, the appearance of new definitive postage stamps would be expected, and there were quite a lot of them.  There were also a number of special events for which commemorative stamps were issued.

And finally, the end of this time period would witness the last postage stamps of the Colony of Newfoundland. 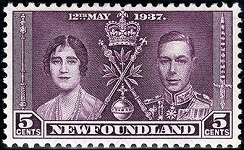 The three Newfoundland stamps shown above (Scott #230-232) were issued on May 12, 1937, the day of the Coronation of King George VI and Queen Elizabeth .

These Newfoundland stamps are engraved, and perforated 11 x 11 1/2.  The designs of these coronation stamps feature the facing portraits of the king and queen, with coronation regalia around. 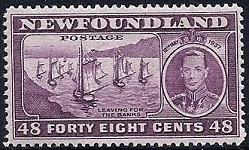 Oddly enough, the eleven pictorial definitive postage stamps shown above were also issued on May 12, 1937 -- Coronation Day.  They are all dated 12 MAY 1937, which in effect, makes them coronation commemorative stamps, as well.

These Newfoundland stamps are perforated 13 1/2 or 14, and they are printed on paper with WMK 224 - the Arms of Newfoundland watermark.

The wider designs feature vignettes used in previous pictorial definitive stamp issues, along with the addition of the facing portrait of King George VI inside of a crowned oval.

These Newfoundland stamps are perforated 13 1/2, and they are printed on watermarked paper.

The 5 C. denomination stamp shown above was issued on June 17, 1939 to celebrate the Visit of King George VI and Queen Elizabeth to Newfoundland.

On November 20, 1939, some of the 5 C. denomination Royal Visit Newfoundland stamps were re-valued as shown above.

Beginning in 1941, many of the smaller sized, portrait and pictorial definitive stamp types of 1932 to 1938 were re-issued, as shown above.

These Newfoundland stamps are all engraved, perforated 12 1/2, and they are printed on watermarked paper. 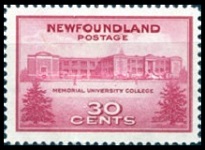 The 30 C. denomination stamp shown above (Scott #267) was issued January 1, 1943 to commemorate the Memorial University College in St. John's. 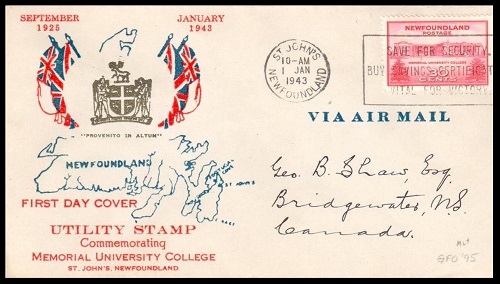 A cacheted First Day Cover of the Memorial University College issue is shown above.  The Scott Catalog erroneously lists the date of issue of this stamp as January 2, 1943. 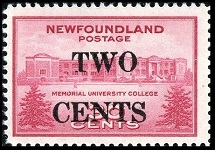 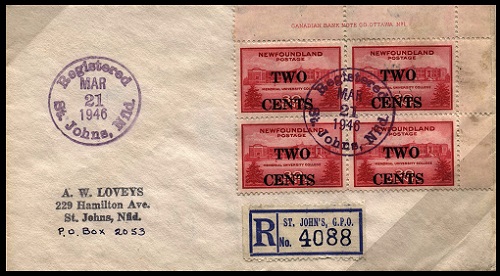 A registered cover, mailed on the first day of issue, is shown above.  The Scott Catalog erroneously lists the date of issue of this stamp as March 23, 1946.

The plate-block-of-four used here is the correct franking for this letter.  The local letter rate was 3 Cents and the local registration fee was 5 Cents, making a total prepaid postage amount of 8 Cents. 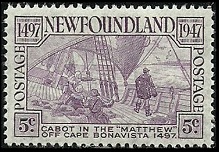 The 5 C. denomination stamp shown above (Scott #270) was issued on June 24, 1947 to commemorate the 450th Anniversary of Cabot's Arrival at Cape Bonavista.

The design features Cabot, in his ship The Matthew, in sight of Cape Bonavista in 1497. 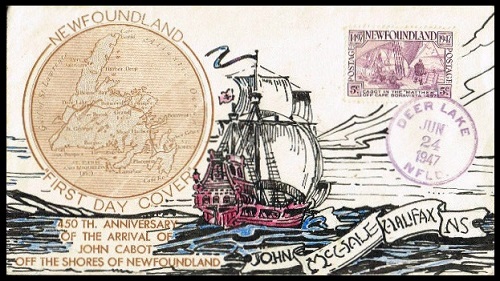 A cacheted First Day Cover of the Cabot Arrival at Cape Bonavista issue is shown above. 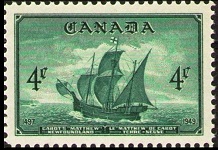 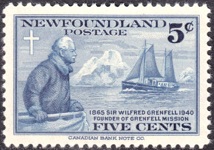 The 5 C. denomination stamp shown above (Scott #252) was issued on December 1, 1941 to commemorate the 50th Anniversary of the Grenfell Mission.

The design features Sir Wilfred Grenfell and the Strathcona II.

Grenfell acquired the ship Strathcona II in 1899, allowing volunteers to treat people in remote fishing communities.  It became a hospital ship, and it was one of the first vessels to ever carry X-ray equipment.

The 4 C. denomination portrait definitive postage stamp (Scott #269) shown above was issued on April 21, 1947 to celebrate the 21st Birthday of Princess Elizabeth.