Beginning in 1932, new definitive Newfoundland stamps were introduced, featuring both portrait and pictorial issues.  The big commemorative event of 1933 was the celebration of the 350th Anniversary of the Annexation of Newfoundland by England.  Additional commemorative stamps for the Silver Jubilee of King George V were issued in 1935.

These Newfoundland stamps are engraved, perforated 13 1/2 or 14, and they are printed on paper with the Arms of Newfoundland watermark.

Their attributes are as follows: 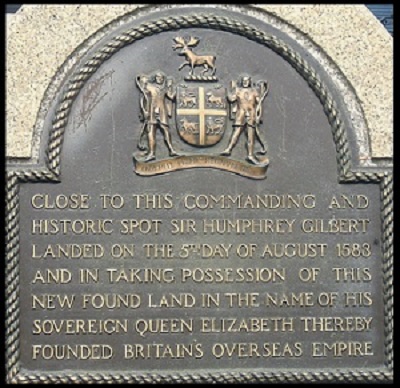 The fourteen commemorative Newfoundland stamps shown below were issued on August 3, 1933 to celebrate the 350th Anniversary of the Annexation of Newfoundland by Sir Humphrey Gilbert on August 5, 1583.

These Newfoundland stamps are engraved, perforated 13 1/2, and they are printed on paper with the Arms of Newfoundland watermark.

The design of the 1 C. denomination Newfoundland stamp shown above is based on an early 17th Century engraving, possibly by Simon de Passe (1595-1647) or one of his children, who were also engravers.

The token shown on this stamp was awarded to Sir Humphrey Gilbert by Queen Elizabeth I prior to his voyage of colonization.  It was delivered to him by his brother, Sir Walter Raleigh, in March 1583.  With the gift of the token, Queen Elizabeth I wished him good luck and a safe voyage.

The token was made of beaten gold, with a pearl at the top.  It was so treasured by Sir Humphrey Gilbert that he wore it on his breast for the rest of his life.

Sir Humphrey Gilbert's five ships were The Delight, The Ralegh (Raleigh), The Golden Hinde, The Swallow, and The Squirrel.  The fleet carried 260 settlers trained in the various fields necessary for the establishment of a colony, provisions, weapons, and sundry products to trade with the native Indians.

The Ralegh (Raleigh) turned back during the voyage, and The Swallow was lost at sea.  The three remaining ships successfully continued on to their destination.

At the end of August 1583, Sir Humphrey Gilbert's remaining fleet departed Newfoundland, having not established a permanent colony, due to the lack of essential supplies.

They followed the same course that Cabot had taken a hundred years earlier.  The Delight, which carried most of their supplies, ran aground near Sable Island and sank, with only sixteen surviving crew members.  The Squirrel, commanded by Sir Humphrey Gilbert, and The Golden Hinde continued on the voyage home.

About 900 miles away from the Azores, they ran into a violent storm, and The Squirrel began sinking.  Gilbert refused to leave his sinking ship, and sitting on the deck, reading a book, he reportedly uttered the phrase, "We are as near to heaven by sea as by land".  Sir Humphrey Gilbert perished, along with his ship, on September 9, 1583.  The Golden Hinde was the only vessel, from Gilbert's original fleet, to safely return to England. 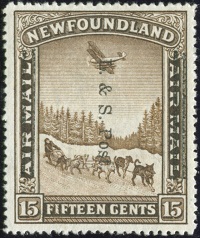 The overprint stands for "Land and Sea Postage".

The four commemorative stamps shown above were issued on May 6, 1935 to celebrate the 25th Anniversary of the Reign of King George V.

These stamps are all engraved, perforated 11 x 12, and they are printed on paper with WMK 4 - the Multiple Crown and Script CA watermark.

Each of the designs features a view of Windsor Castle and a left-facing profile of King George V with various types of coronation regalia integrated elsewhere in the design.