New definitive air mail Newfoundland stamps appeared at the beginning of 1931.  These new flight-themed definitive stamps were designed specifically for use on all types of mail traveling by airplane.

Watermark 214, shown above, was not printed on each stamp, but across the entire pane, thus some of the stamps from these panes may show only a small trace of the watermark, or in some cases, no watermark at all. 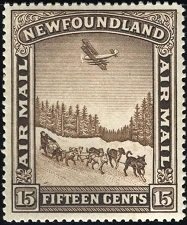 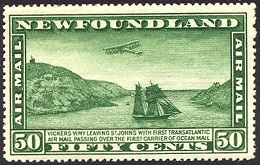 The three pictorial definitive air mail stamps shown above were issued on January 2, 1931.

According to the Scott Catalog, these Newfoundland stamps were printed on both unwatermarked paper and on paper with WMK 241 -- Arms of Newfoundland watermark -- across the entire pane of stamps.

According to the Stanley Gibbons catalog, these Newfoundland stamps were issued on January 2, 1931 on unwatermarked paper, and again on March 13, 1931 on paper with the Arms of Newfoundland watermark.

The technical attributes table below is based on the catalog listings.

IS THAT A SWASTIKA?

The short answer is Yes AND No!  Anyone familiar with the brutal historical periods of the 20th Century may be alarmed, when first looking at the symbols on the One Dollar denomination air mail stamp shown above.  The last time I saw one, outside of my stamp album, was many years ago, when I toured a 600 year old Buddhist temple in Macao.  The symbol appeared on the corners of the main altar there.

Swastika is derived from the ancient Sanskrit word "svastika" meaning a "lucky or auspicious object".  In German, it is called a "hakankreuz" or literally a "hooked cross".  This is actually a Worldwide religious symbol, dating back to the Neolithic Era (10,000 B.C. - 4,500 B.C.).  Unfortunately, the meaning of swastika was corrupted, when the German NAZI party used it as their heraldic symbol, during their brutal reign from 1933 to 1945.  There is a difference though, the historical swastika is shown upright, as it appears on the stamp above.  The NAZI symbol is tilted to the right.

The swastika was the national symbol of Ancient Carthage in 1,000 B.C. and the symbol is also used in Buddhism and Hinduism, even to this day.  The Ancient Romans, as well as other ancient European and Asian cultures, used it as a decorative symbol for "good luck".  Some of the native Indian tribes of North America used the symbol as well, which is the source the government of Newfoundland used for the design of the stamp shown above.  In this context, it signifies "good fortune" or maybe an allusion to the "auspicious events" described on the stamp!. 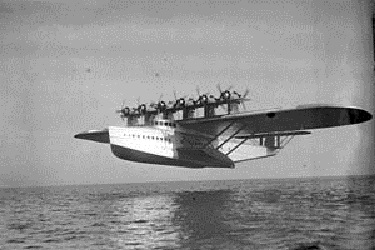 On May 19, 1932, the One Dollar denomination definitive air mail stamp of 1931 was overprinted and revalued for the return flight of the Dornier DO-X from New York via Newfoundland, to Berlin, Germany.

This was one of the first large, passenger aircraft capable of trans-Atlantic flight. 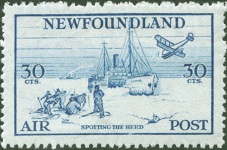 On June 9, 1933, a new set of five pictorial definitive air mail Newfoundland stamps was issued (Sc. #C13-17).  The stamps are engraved, and they are printed on watermarked paper.

The designs feature aircraft and symbolic themes of Newfoundland. 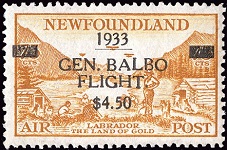 On July 24, 1933, the 75 C. denomination definitive air mail stamp of 1933 was overprinted and revalued for the return flight of General Italo Balbo's Seaplane Squadron from the Century of Progress World's Fair in Chicago to Rome (Scott #C18). 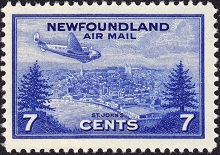 The last Newfoundland air mail stamp was issued on June 1, 1943 (Scott #C19).  This stamp is engraved, and it is printed on unwatermarked paper.  The design features an Airplane over St. John's, Newfoundland.