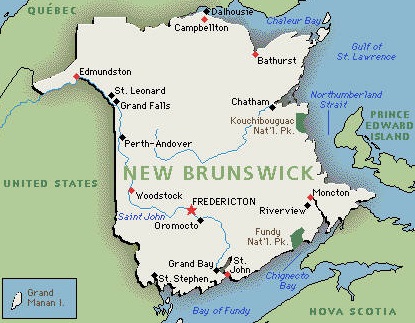 New Brunswick is one of Canada's three maritime provinces.  New Brunswick is bordered by Quebec on the North, the U.S. State of Maine on the West, and by the Bay of Fundy and the Gulf of St. Lawrence on the East and South.

New Brunswick is named after the German Duchy of "Braunschweig" (English: Brunswick), the ancestral home of the Hanoverian family of King George III of Great Britain.  The colony of New Brunswick was created in 1784, when it and Prince Edward island were politically separated from the existing Crown Colony of Nova Scotia.

The first New Brunswick stamps, issued during 1851, featured diamond-shaped denominations.  The major denomination types are shown above.  These stamps are imperforate, and they are printed on bluish-tinted paper.

Reprints exist of these first New Brunswick stamps.  They are usually printed in different colors, and they are printed on hard, white paper.

Charles Connell (1810-1873) was a Canadian politician, remembered mainly for placing his own portrait on a 5 Cent denomination postage stamp of New Brunswick.

Connell was appointed Postmaster General of New Brunswick in 1858, at a time when increasing trade with the United States was forcing the British colonies to reconsider their currencies and institute a decimal system that would be more familiar to their American neighbors.  New Brunswick adopted a decimal currency in 1859, and in the following year, Connell issued the first postage stamps in the new 5 Cent denomination.  While few people had problems with the new currency, they were outraged that Connell chose to depict himself, instead of Queen Victoria, on the new stamp.  In an effort to stem the criticism and the charges of extreme arrogance, he offered to buy up all the stamps, and then burned them, publicly, on the front lawn of his house.

It is unknown how many of these unauthorized New Brunswick stamps have survived, but there are only a few dozen existing examples known.  Dangerous forgeries and reprints of this stamp also exist.

New Brunswick issued their first decimal currency stamps beginning in 1860.  These new stamp designs are perforated 12, and they are all printed on white paper.