For commemorative Netherlands stamps, the big events of this period were the golden jubilee of a reigning monarch and the inauguration of a new monarch.

By late 1947, the health of the 67-year-old Queen Wilhelmina was becoming increasingly worse, making it difficult for her to perform her royal duties.  Her daughter, Princess Juliana, assumed the role of regent during late 1947.  Queen Wilhelmina seriously considered abdicating, but her daughter urged her to stay on the throne, so she could celebrate the golden jubilee of her reign during September 1948. 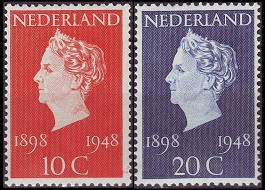 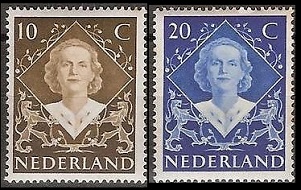 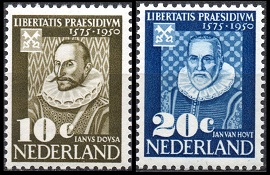 The two Netherlands stamps shown above (NVPH #561-62, Sc. #328-29) were issued on October 3, 1950 to commemorate the 375th Anniversary of the founding of the University of Leyden, the oldest university in the Netherlands.

The university was founded by William, Prince of Orange (1533-1584), the leader of the Dutch Revolt during the Eighty Years War.  The modern Dutch royal family and the university still have a close relationship.  Queen Juliana, Queen Beatrix, and King Willem-Alexander are all former students of the university.

The 10 C. denomination features a portrait of Jan van der Does (1545-1604), a Dutch statesman, jurist, historian, poet, and philologist. He was also the first curator of the University of Leyden, an office which he held for 30 years. 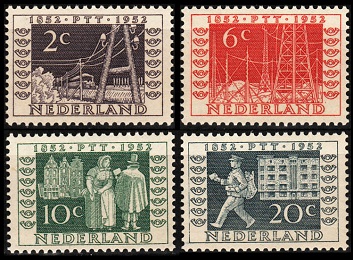 The four commemorative stamps shown above (NVPH #588-91, Sc. #332-35) were issued on June 28, 1952 to celebrate the Centenaries of Netherlands Postage Stamps and of the State Telegraph Service.

These stamps were on sale from June 28 through August 31, 1952, during the two centennial celebrations.

The colors and designs are as follows: 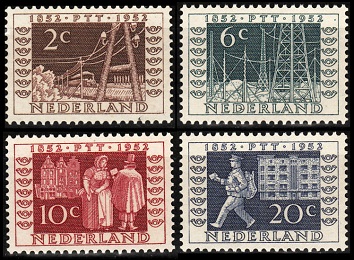 The colors and designs are as follows:

These stamps (in changed colors) were only on sale at the International Postage Stamp Centenary Exhibition, held in Utrecht from June 28 through July 6, 1952.  The stamps sold for 1.38 Gulden, which included the price of the admission ticket to the international exhibition.

Due to the limited availability of this second centenaries set, they are now scarce, and unfortunately, expensive.

Return to Netherlands Stamps from
Commemoratives of 1948-1952 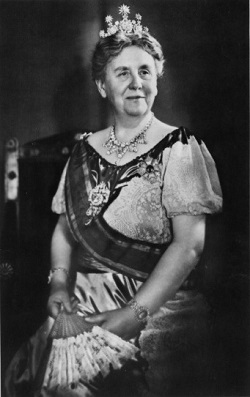 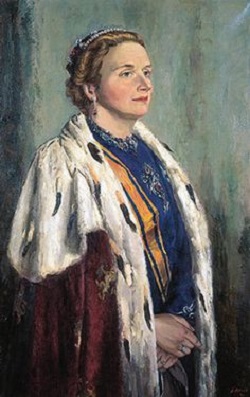 The design features a miner with a drill.