Commemorative Netherlands stamps issued between 1943 and 1945 can be a bit confusing without a little historical perspective.  During this period, there were actually TWO entities called the Netherlands, and BOTH of them issued commemorative or propaganda postage stamps.

This political neutrality didn't suit their Fascist German neighbors, who intended to make the Netherlands part of the Greater Third Reich.  Germany invaded the Netherlands in May 1940 and established an occupation government there.  The country was then ruled by a German-appointed governor and the Dutch National Socialist Party.

During the invasion, the Dutch royal family and the heads-of-government escaped to Great Britain, where they formed a government-in-exile.  Thus, there were two political entities called the Netherlands, during the period from 1940 to 1944.  Though the Netherlands had been occupied by Germany, the Dutch colonies around the World remained loyal, and they fought against the Axis powers with the Allied nations during World War II.

The Netherlands was liberated by Allied forces during 1944 and 1945, and after the fall of Germany in May 1945, Queen Wilhelmina and the legitimate government of the Netherlands returned to power. 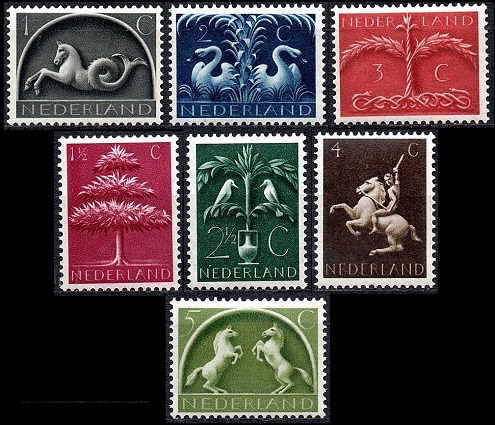 The seven (German occupation) Netherlands stamps shown above (NVPH #405-11, Sc. #245-51) were issued during 1943.  The NVPH catalog refers to these stamps as the Germanic Symbols set.

These stamps were also extensively used as regular definitive postage stamps.  As a result, they are all very common, both in mint condition and in used condition. 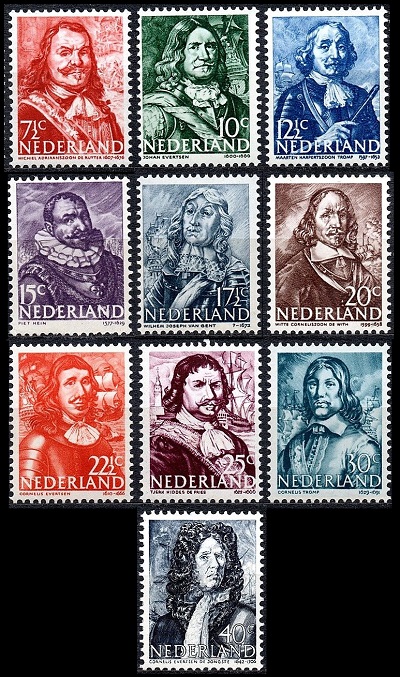 These stamps were also extensively used as regular definitive postage stamps.  As a result, they are all very common, both in mint condition and in used condition. 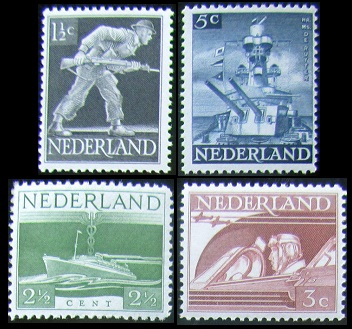 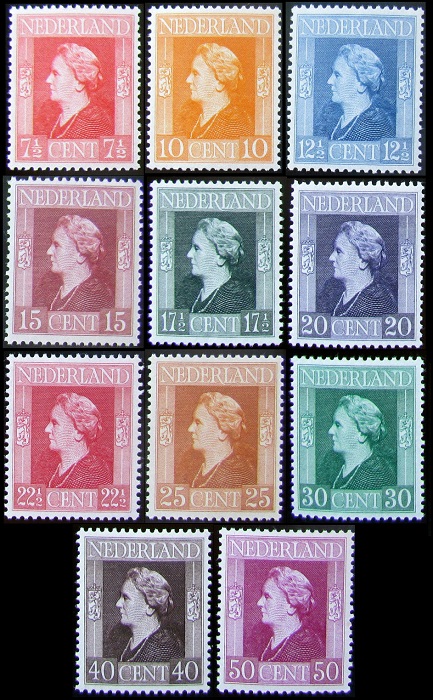 The fifteen (government-in-exile) Netherlands stamps shown above (NVPH #428-42, Sc. #262-76) were printed in Great Britain and issued between 1944 and 1946.  The NVPH catalog refers to these stamps as the Liberation Stamps set.

These stamps were issued for use by Dutch naval and merchant vessels during the liberation of the Netherlands.

Return to Netherlands Stamps from
Commemoratives of 1943-1945

The overprinted and re-valued (German occupation) Netherlands stamp shown above (NVPH #404, Sc. #244) was issued on January 15, 1943 to celebrate the Founding of the European Union of Posts and Telegraphs at Vienna on October 19, 1942.