Between 1942 and 1944, only three surtaxed sets of stamps were issued, and only one of them benefited any public charity.  After the surrender of Germany in 1945, the legitimate government of the Netherlands resumed issuing charity stamps on their pre-war schedules. 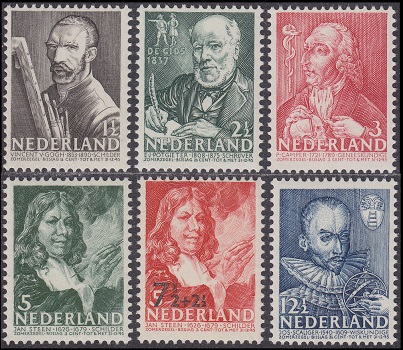 The 3 C. + 3 C. denomination features Petrus Camper (1722-1789), a noteworthy Dutchman of many trades.  During his life, he was a physician, anatomist, physiologist, midwife, zoologist, anthropologist, paleontologist, naturalist, professor, sculptor, and a conservative politician.

This stamp was also issued in booklets.  The panes of four stamps are scarce and expensive. 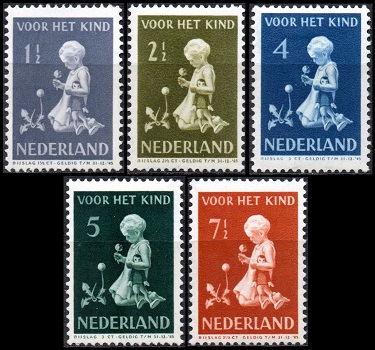 The design of these stamps features a little girl with flowers and a doll. 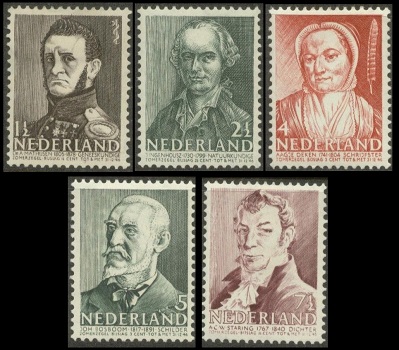 The 5 C. + 3 C. denomination features Johannes Bosboom (1817-1891), a Dutch painter and water-colorist of The Hague School, noted for his paintings of church interiors. 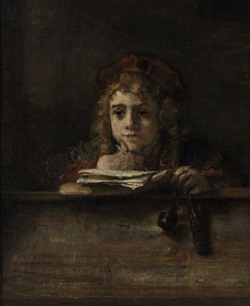 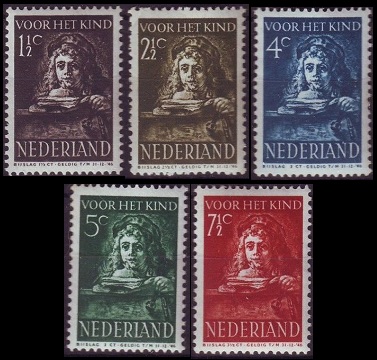 The design of these stamps features the detail of Rembrandt's 1655 painting of his 14-year-old son, Titus van Rijn, studying at his desk. 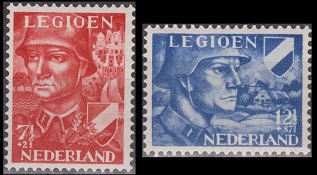 The designs of these stamps depict Dutch legionaries.

The Netherlands Legion was an association created in 1941 by the Netherlands National Socialist Party.  Its purpose was to recruit Dutch soldiers to fight the Bolsheviks on the Eastern Front, alongside the German military.  Most of them were recruited into the Waffen-SS, where they wore German Waffen-SS uniforms, but they fought as Dutch soldiers and wore Dutch military insignias.  The Netherlands legion, made up of an estimated 20,000-25,000 volunteers, fought in various campaigns on the Eastern Front throughout the duration of the war. 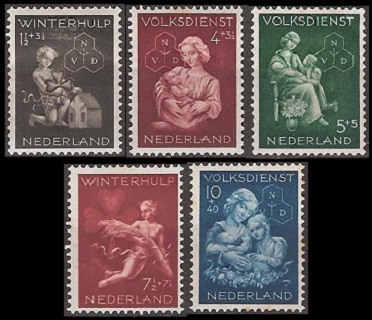 In the manner of German charity stamps, these Netherlands stamps, issued during the German occupation, were the first to have the surtax amount printed on them.

The initials on these stamps, "NVD", stand for "Nederlandse Volksdienst" or "Dutch People's Service".  The organization was established in 1941 by the Dutch National Socialist Party to manage all charity and social welfare, or in other words, to manage Dutch civil society.  During this period, all private charities were banned.

The designs of these stamps feature: 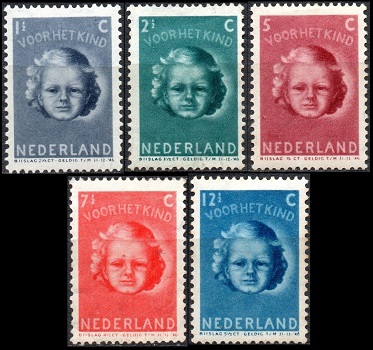 The design of these Netherlands stamps features a portrait of a little girl.

Return to Netherlands Stamps from
Charity Stamps of 1940-1945