Commemorative Netherlands stamps were issued every year, during the period from 1937 to 1939, though they were few in number. 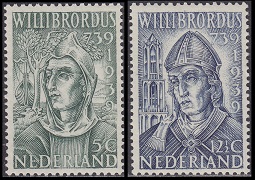 The designs feature drawings of ....

Willibrord (658-739) was an Angle missionary from Northumbria (England), revered in the Netherlands as the "Apostle to the Frisians".  Willibrord grew up under the influence of Wilfrid (633-709), the Bishop of York.  He became a Benedictine, and as a youth, he worked at the Abbey of Rathmelsigi (Ireland), a center of European learning in the 7th Century.  Willibrord was assigned the mission of traveling to Frisia to Christianize the pagan North German population there.

Willibrord traveled to Rome in 695, where Pope Sergius I (650-701) consecrated him as the Bishop of the Frisians.  He returned to Frisia to preach and to establish churches, among them a monastery at Utrecht, where he built his cathedral.  For this, he is considered the First Bishop of Utrecht. 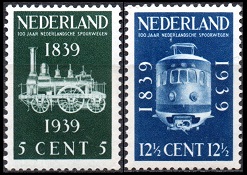 The two designs feature a locomotive of 1839 and an electric railroad car of 1939.

Return to Netherlands Stamps from
Commemoratives of 1937-1939