The first commemorative stamps of the Netherlands were issued on March 23, 1907 to celebrate the 300th Anniversary of the Birth of Admiral de Ruyter.  The designs of the three stamps shown above (NVPH #87-89, Sc. #87-89) feature Admiral de Ruyter and and his fleet. 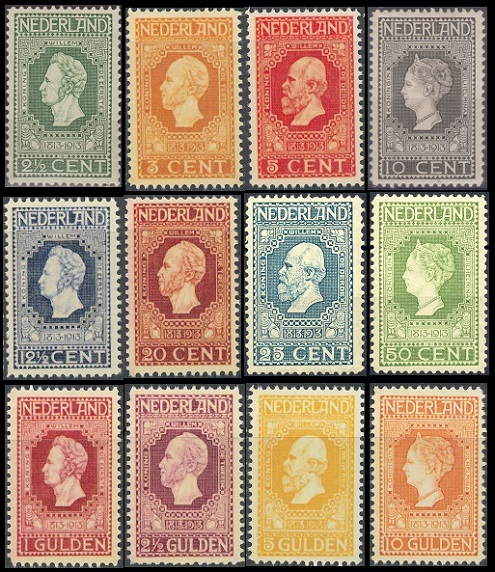 The twelve Netherlands stamps shown above (NVPH #90-101, Sc. #90-101) were issued on November 29, 1913 to celebrate the 100th Anniversary of the Independence of the Netherlands from Napoleon's French Empire.

The designs of these commemorative stamps picture the first four monarchs of the Kingdom of the Netherlands, as follows:

Only 20,000 of the 10 Gulden denomination stamps were printed, thus they are very rare and quite expensive today.  The other denominations in the set are relatively affordable. 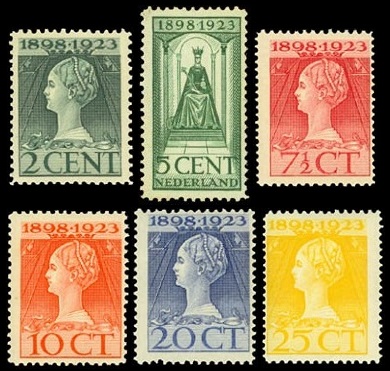 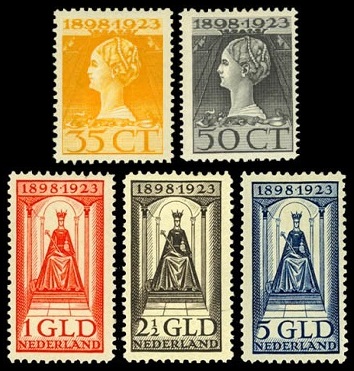 The eleven commemorative Netherlands stamps shown above (NVPH #121-31, Sc. #124-34) were issued during October 1923 to celebrate the 25th Anniversary of the Investiture of Queen Wilhelmina.

The Royal Dutch Lifeboat Society, now called the Royal Netherlands Sea Rescue Institution, was founded in 1824 as a voluntary association tasked with saving lives at sea.  Today, it maintains 39 lifeboat stations along the Dutch coast.  Between 1824 and 2006, they answered 36,358 distress calls and have rescued 79,887 people from distress situations.  This institution is entirely financed by public donations.

Return to Netherlands Stamps from
Commemoratives of 1907-1924 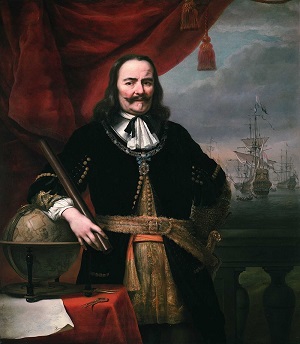 Lieutenant-Admiral-General Michiel Adriaenszoon de Ruyter (1607-1676) is one of the most revered mariners and naval officers in Dutch history.

He was a pious person, and he was much loved by both his sailors and soldiers, earning him the nickname "Bestevaer", the Old Dutch word for "Grandfather". 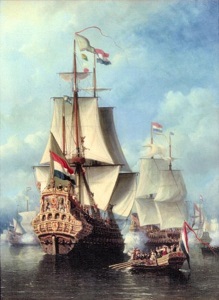 The name of Admiral de Ruyter's flagship, depicted in the 1857 painting shown above, refers to an epic event in Dutch history.

When Spanish rule ended in 1581, these provinces joined together to form the Republic of the Seven United Provinces, otherwise known as the Dutch Republic.