National Firearms Act of 1934 tax stamps first appeared in 1934, and they are STILL in use today.  These stamps were issued as a government measure to tax and control the private sector manufacture, sale, and transfer of machine guns, short barreled rifles (sawed-off rifles and shotguns), and some types of concealable weapons being used in violent crimes.  This was the United States' first federal effort at gun control.  A little background information may be in order here.

In the United States, the 1920's and 1930's was the Prohibition Era and the era of the well-publicized big-name gangsters, such as Al Capone, John Dillinger, and Baby Face Nelson.  Their crime syndicates exercised control over major cities across the country, through intimidation, extortion, and the frequent use of lethal force.  It even became worse, when some of these organizations went to war against each other for control of lucrative urban territories.  Events such as the St. Valentines Day Massacre catapulted public safety in the United States into a major national issue, and there was widespread public support, at the time, for the National Firearms Act of 1934.

The purpose of the National Firearms Act of 1934 was NOT to limit the sale and transfer of ALL firearms.  The act sought to limit the number of machine guns, as well as rifles and shotguns with a barrel length of less than eighteen inches, in the public sector, by levying a prohibitive federal tax on their sale and transfer.

A federal tax of one dollar (later five dollars) was also levied on the sale and transfer of concealable-types of weapons, other than handguns, such as canes, lighters, umbrellas and so forth, that could be used to fire ammunition.

The overprinted 1 Dollar documentary revenue stamp shown above was issued in 1934.

All of the National Firearms Act tax stamps issued between 1934 and 1960 are perforated 11, and they are printed on paper that is watermarked USIR. 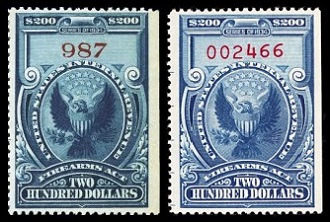 The two 200 Dollar denomination firearms transfer tax stamps shown above were issued between 1934 and 1950.  They were issued in vertical strips of four, which are imperforate at the top, bottom, and right side.

There are two types: 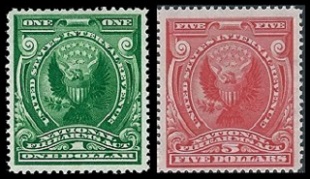 The two firearms transfer tax stamps shown above were issued between 1938 and 1960.

These stamps were issued in panes of 50, which are straight-edged on the outer edges. 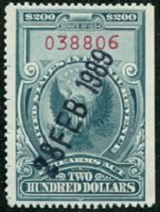 The 200 Dollar denomination firearms transfer tax stamp shown above was issued in 1974.  This stamp is Type II, utilizing serial numbers beginning with 3001, and it is printed on unwatermarked paper. 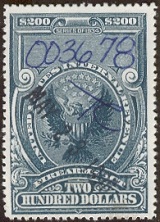 The firearms transfer tax stamps issued since 1990 do not have printed serial numbers on them, and as such, they are not sold to the public in mint condition.

The recent stamps are taped or glued onto the transfer document, and the glue used is NOT water soluble.  Trying to remove them will damage or destroy the stamps.

As it is practically impossible to legally buy a machine gun in the United States today, examples of these post-1990 stamps in used condition or tied to transfer documents are very rare.  An example of Sc. #RY8 is shown above.

Catalog attributes of the post-1990 issues are as follows: