Three new sets of definitive Montenegro stamps appeared during the period from 1902 to 1913, with all of them featuring the portrait of Prince / King Nicola I.  During this time, commemorative stamps would also be issued to celebrate a new constitution and the establishment of the Kingdom of Montenegro in 1910.

Acknowledgement of Receipt stamps would continue to be issued during this period.  They will all be shown in the column at the right.

It was an optimistic time for the new constitutional monarchy of Montenegro, but unfortunately, as would happen with most of their Balkan neighbors, their nation would be obliterated, as the result of World War I. 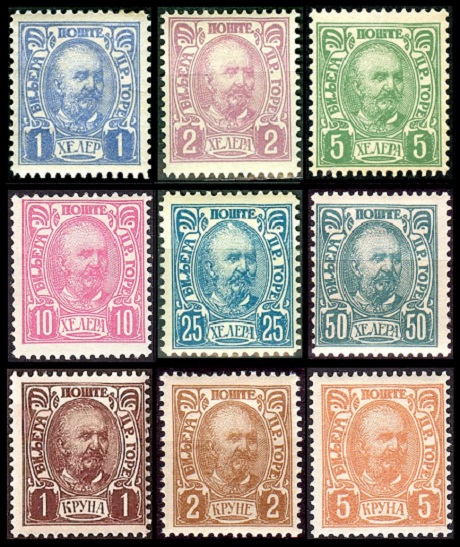 The nine portrait definitive Montenegro stamps shown above were issued on July 12, 1902.  The stamps are lithographed on unwatermarked paper, and they come in a variety of perforation gauge combinations, ranging from 12 1/2 to 13 1/2. 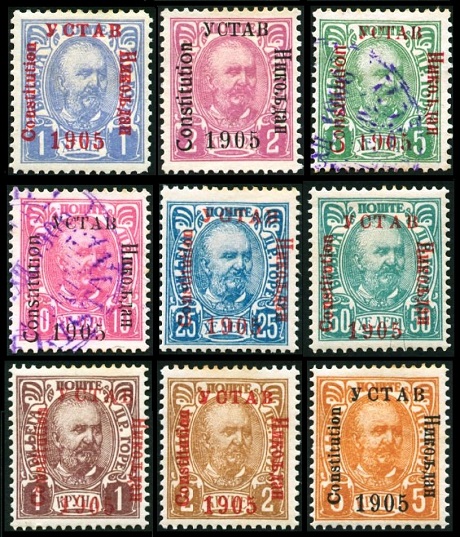 The nine definitive Montenegro stamps of 1902 shown above (Sc. #66-74) were overprinted on December 8, 1905 to celebrate the new Constitution of the Principality of Montenegro.

The Constitution of 1905 was enacted to limit the monarch's rule.  This was done to forestall a revolution, like the one that occurred in Russia during that year.  The new constitution defined Montenegro as the nation-state of the Montenegrins. It guaranteed equality under the law, freedom of expression, and freedom of religion, concepts that were not observed by many Eastern European monarchies of the time.

The management of the state government was broken into three divisions, the National Assembly, the Cabinet of Ministers, and the Great Court.  The monarch remained the hereditary head-of-state and the commander of the army. 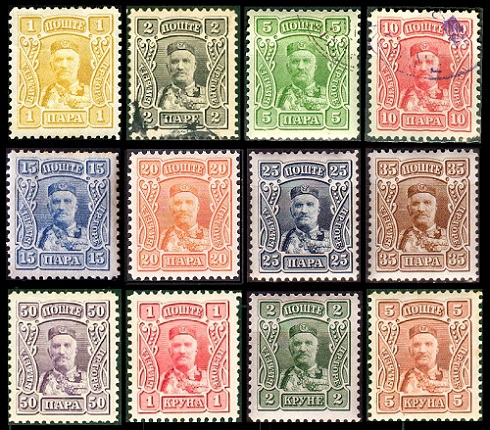 The twelve portrait definitive Montenegro stamps shown above were issued on June 1, 1907.  The stamps are engraved, and they are perforated 12 1/2.

Stamps that are imperforate or part-perforated are considered by experts to be printer's waste. 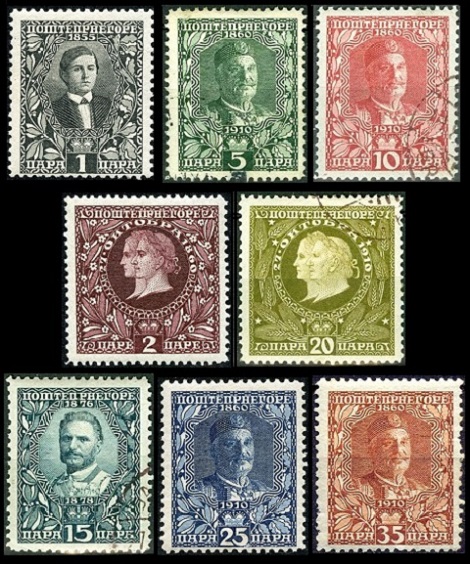 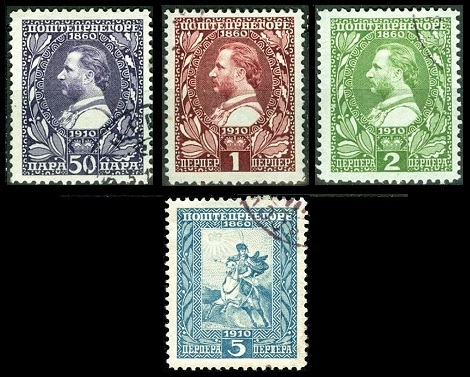 These stamps are all engraved, and they are perforated 12 1/2.

The Scott catalog attributes and descriptions are as follows. 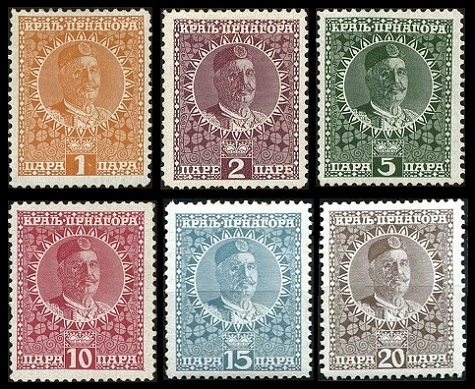 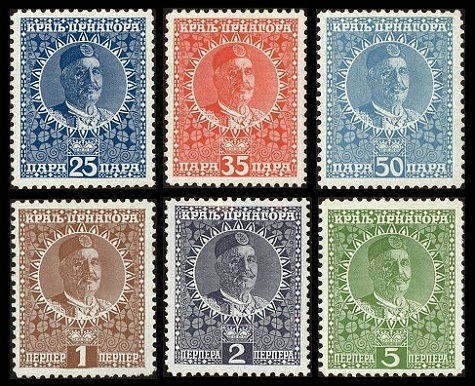 The twelve portrait definitive Montenegro stamps shown above were issued on April 1, 1913.  The stamps are typographed, and they are perforated 12 1/2.

In 1916, the Austro-Hungarian Empire invaded the Kingdom of Montenegro.  The royal family fled to Bordeaux, France, where a government-in-exile was established.  After World War I, the monarchy was dissolved, and the royal family never returned to Montenegro.

King Nicola I and Queen Milena were later buried in Italy.  Their remains were repatriated to Montenegro in 1989, and they are now buried in the Court Church on Cipur, Cetinje, Montenegro.


Definitive and commemorative stamps were issued for Montenegro during the later wartime occupations of Austria (1917-1918), Italy (1941-1943), and Germany (1943-1944), but postage stamps would not be issued again for the sovereign nation of Montenegro, until the beginning of the 21st Century.

These Acknowledgment of Receipt stamps were usually similar to the regular definitive postage stamps, except that they had the letters "A" and "R" imprinted on them, usually in the upper corners.  These type of stamps were rarely used elsewhere in Europe.

When these stamps were affixed to mail matter, a form would be mailed back to the sender, from the receiving post office, confirming the receipt of the letter.

The 25 H. denomination Acknowledgment of Receipt stamp shown above (Sc. #H2) was issued in 1902.  The stamp is lithographed on unwatermarked paper, and it is perforated 12 1/2.

The 25 H. denomination Acknowledgment of Receipt stamp shown above (Sc. #H3) was issued in 1905, as the companion to the overprinted Constitution commemorative postage stamps of that year.

The 25 Pa. denomination Acknowledgment of Receipt stamp shown above (Sc. #H4) was issued in 1907, as the companion to the portrait definitive postage stamps issued during that year.

The 25 Pa. denomination Acknowledgment of Receipt stamp shown above (Sc. #H5) was issued in 1913, as the companion to the portrait definitive postage stamps issued during that year.