The first definitive Montenegro stamps were issued in 1874, coinciding with the opening of the first post office for public use in Cetinje.  This small Balkan nation is called "Црна Гора / Crna Gora" (Montenegrin / Serbian) or "Montenegro" (Italian), literally meaning "Black Mountain".

Between 1854 and 1878, postage stamps of the Austrian Imperial post offices in the Turkish Empire were used on mail sent from the Austrian post office in Antivari (Bar), Montenegro.

The Illyrians were the earliest inhabitants of the area, and their culture continued to thrive in the rugged terrain, even through the Roman and Byzantine Eras.  At the beginning of the 2nd Century, present-day Montenegro became part of the Roman Imperial Province of Dalmatia, with its most important commercial center being at Doclea.

During the early part of the Middle Ages, present-day Montenegro survived, at different times, as the sovereign Principalities of Duklja and Zeta, but in 1496, the region was conquered by the Ottoman Empire.  It was at the beginning of Ottoman Imperial domination that the former Principality of Zeta became known as "Montenegro".

During the 18th and 19th Centuries, the Prince-Bishops of Montenegro, taking advantage of their mountainous homeland, carried on a campaign of guerilla warfare against the domination of the Ottoman Empire.

Under the leadership of Prince Nicola I of Montenegro (Lived: 1841-1921, Prince: 1860-1910, King: 1910-1918), Montenegro fought a series of wars with the Ottoman Empire, lasting from 1862-1878, and the Montenegrins finally succeeded in gaining their freedom from foreign domination.  At the Congress of Berlin in July 1878, Montenegro was officially recognized by the international community as a sovereign nation! 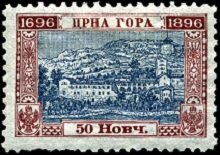 Between 1895 and 1913, Montenegro was one of the very few European countries to issue Acknowledgment of Receipt stamps.  Montenegrin Postage Due stamps were also issued, but they are very few in number.

Links to pages, containing information about the philately and history of Montenegro, will eventually be found at the top of the right column.