The first definitive Mexico stamps were issued in 1856, and they all bore the portrait of Miguel Hidalgo y Costilla, considered the "Father of the Republic of Mexico".

For additional security against thefts, all of the classical postage stamps of Mexico were overprinted with the names of the various postal districts.  Sometimes, these overprints included district numbers and year dates, as well.

The stamps would be shipped from Mexico City, by stagecoach, and then they would be overprinted by the district office, once they were received.  As a result, the district office overprints vary greatly in placement, style, size, and color.  District postal officials did not always comply with this federal requirement, and some of the sheets of stamps were sold without having any overprints.

At the time the first Mexican postage stamps were issued, Mexico was divided into about 50 postal districts.  Some of the district overprints are very rare, and they are highly prized by specialists. 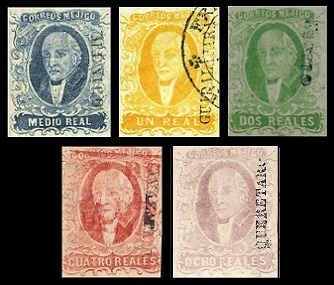 The five definitive Mexico stamps shown above were issued in 1856.  The stamps are engraved on unwatermarked paper, and they are imperforate.

All of these stamps, except for the 1 Real denomination, have been reprinted several times.  The impressions usually show signs of plate wear and they appear smudgy.

Dangerous forgeries also exist, so great care should be taken, when buying any of the more expensive stamps in this set. 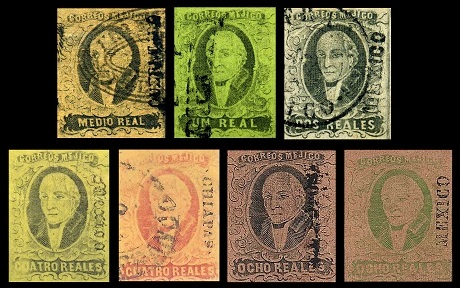 The seven definitive Mexico stamps shown above were issued in 1861.  Their physical attributes are identical to those of the stamps issued in 1856, except that they are printed in new colors and on colored papers (variable shades).

All of these stamps exist WITHOUT the district overprint.

Dangerous forgeries also exist, so great care should be taken, when buying any of the more expensive stamps in this set.

The four definitive Mexico stamps shown above were issued in 1864.  These stamps were printed by the American Banknote Co.  They are engraved on unwatermarked (usually toned) paper, and they are perforated 12.  Authentic examples of all of these stamps must have the district overprint of either Saltillo or Monterrey.

The images shown above are from major auction websites and the stamps are all certified as being authentic.

Here is a link to an excellent web page on the STAMP FORGERIES website, featuring the forged stamps of Mexico for the years 1856 to 1864.  The web page features large images, comparing the original stamps with the known forgeries. 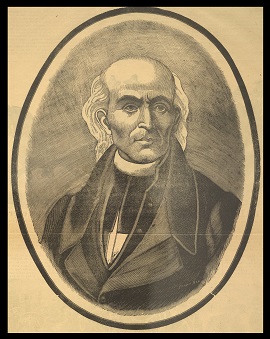 Don Miguel Gregorio Antonio Ignacio Hidalgo-Costilla y Gallaga Mandarte Villaseñor, otherwise known as Miguel Hidalgo y Costilla (1753-1811) was a Roman Catholic Priest and a military leader during the Mexican War of Independence (September 16, 1810 - September 21, 1821).  He became a Generalissimo (Supreme Commander) of the Mexican Revolutionary Army, and he is considered the "Father of the Nation" in the Republic of Mexico.

Hidalgo was betrayed, captured, and taken to Chihuahua on March 21, 1811.  He was turned over to the Bishop of Durango for defrocking and excommunication on July 27, 1811.  Hidalgo was tried for treason by a military court and sentenced to death.  He was executed by firing squad and then later beheaded on the morning of July 30, 1811.

September 16, the date the Mexican War of Independence began, is observed as Independence Day in the Republic of Mexico.