Malta stamps, during the period from 1953 to 1959, celebrate the coronation of a new monarch and memorialize the contributions of the Maltese people during World War II.

The three stamps shown above (Sc. #243-45) were issued on September 8, 1954 to commemorate the 100th Anniversary of the promulgation of the Dogma of the Immaculate Conception. 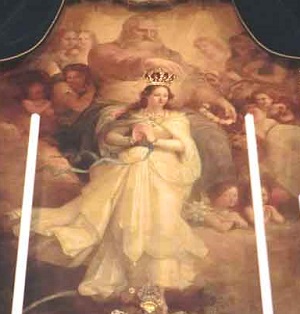 The designs of these Malta stamps feature the central altarpiece of the
Collegiate Parish Church, or the Church of Our Lady of The Immaculate Conception in Cospicua.  A detail of the altarpiece is shown above.

The following definitive Malta stamps of Queen Elizabeth II are separated into small groups, with the attributes and historical descriptions, where
appropriate, following each group.

The Great Siege of Malta took place in 1565 when the Ottoman Empire invaded the island of Malta.  The Turkish armada consisted of 193 vessels and an estimated 28,000 men.  The Maltese defenders consisted of a  force of about 3,000 Knights from various kingdoms and of about 3,000 Maltese civilians.  Despite the bombardment by 130,000 cannon balls during the four-month-long siege, the Maltese defenders triumphed.  This victory would became one of the most celebrated events in 16th Century Europe.

The monument, located in Valletta, was sculpted by Antonio Sciortino (1879-1947), and it was inaugurated on May 8, 1927.  The three figures represent the ideals of faith, fortitude, and civilization.

The Wignacourt Aqueduct is a 17th-century aqueduct in Malta.   The Order of Saint John began construction of the aqueduct in 1610, with its intended purpose being the transportation of water from Dingli and Rabat to Valletta.  The Aqueduct was inaugurated on April 21, 1615, and it continued to be used until the 20th century.

The Our Lady of Victories Church was built to commemorate the victory of Knights of the Order of St John and the Maltese people over the Turkish invaders on September 8, 1565.  Grand Master Jean Parisot de Valette personally funded the building of the church, and upon his death in 1568, he was buried in the crypt of the church.

The Malta Memorial commemorates the 2,298 British Commonwealth airmen who lost their lives in various World War II air battles around the Mediterranean.

St Marija Assunta Church, also known as the Mosta Dome, is a huge round church, featuring the third largest unsupported dome in the World.  On April 9, 1942, the church was nearly destroyed during a bombing raid.   An Italian bomb hit the dome of the church, but it failed to explode. The detonator was later removed, and a replica of the bomb is now displayed there as a memorial. 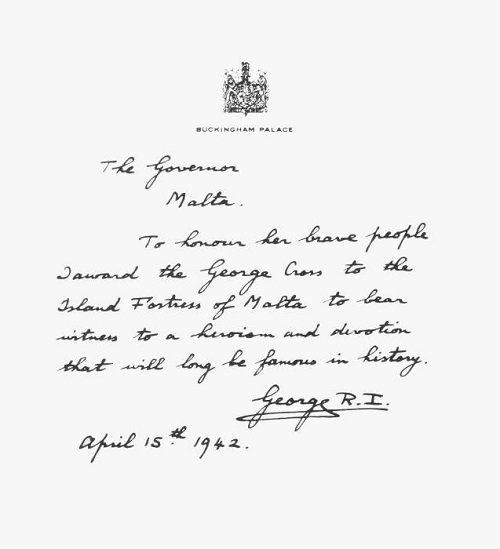 The King's Scroll is the letter sent to the Governor of Malta by King George VI on April 15, 1942, awarding the George Cross to the Island Fortress of Malta for their bravery during World War II.

The Maltese were so moved by the award that the country made the George Cross a permanent part of their national flag.

A readable version of the letter is shown above. 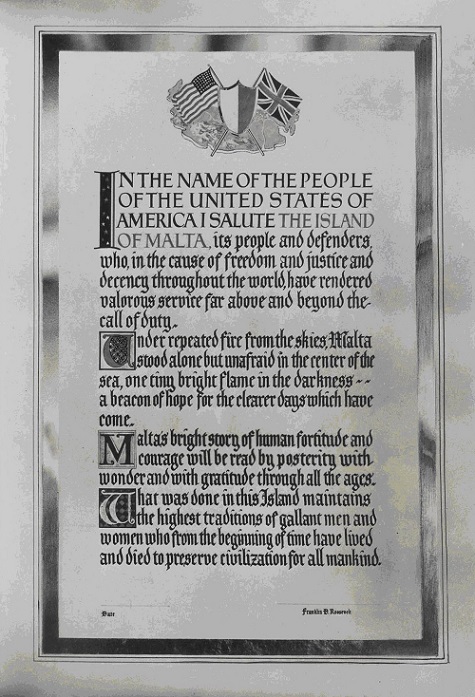 The Roosevelt Scroll is the citation sent to the People of Malta on December 7, 1943 by President Franklin Roosevelt, saluting the people of Malta for their bravery during World War II.

A readable version of the letter is shown above.

Vedette is the watch-tower of Fort St. Michel, a coastal fortification in Senglea, Malta.  The fortress was originally constructed in the 1550's by the Order of St. John.  Unfortunately, much of it was destroyed by Axis bombings during World War II.

Les Gavroches (French: The Street Urchins) is a bronze statue in Barrakka Garden, Valletta, Malta.  The statue was sculpted by Antonio Sciortino (1879-1947), and it was inspired by the novel, Les Miserables, by Victor Hugo (1802-1885) in which Hugo describes the lives of three poor street urchins living in Paris at the time of the 1848 Revolution.  This sculpture represents the extreme economic hardships faced by the Maltese at the beginning of the 20th Century.

The Christ the King Monument in Floriana, Malta is another bronze statue sculpted by Antonio Sciortino.  It recalls a very important event in Malta’s jubilee celebrations marking both the beginning of the 20th century, and the Holy Year 1900, dedicated to Christ the Redeemer.  At the base of the statue is a kneeling figure, representing the Maltese Peoples' devotion to Christianity.

The sepulchral monument to Grand Master Nicolas Cotoner (1608-1680), was produced by Domenico Guidi (1625-1701), and it is located on the right side of the main altar in the Chapel of Aragon in St. John's Co-Cathedral.  The Cotoner Monument consists of a pyramidal distribution of figures, with a central grouping of arms and trophies which surround the bronze gilded bust of the Grand Master.

The Baptism of Christ is a marble sculpture by Giuseppe Mazzuoli (1644-1725) in front of the main altar in St. John's Co-Cathedral. 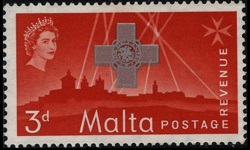 The three Malta stamps shown above (Sc. #263-65) were issued on April 15, 1957, and they were the first issue in an annual series commemorating the Award of the George Cross to Malta during World War II.

The three Malta stamps shown above (Sc. #266-68) were issued on February 15, 1958 to celebrate Technical Education in Malta.

The three Malta stamps shown above (Sc. #269-71) were issued on April 15, 1958, and they were the second issue in an annual series commemorating the Award of the George Cross to Malta during World War II.

The three Malta stamps shown above (Sc. #272-74) were issued on April 15, 1959, and they were the third issue in an annual series commemorating the Award of the George Cross to Malta during World War II. 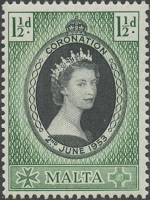 The stamp shown above (Sc. #241) was issued on June 3, 1953 to celebrate the Coronation of Queen Elizabeth II.

The design features one of the many photographs of the young queen taken by Dorothy Wilding (1893-1976) during February 1952, just a few days after the accession of the new monarch. 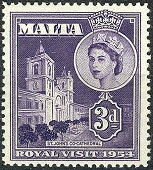 The stamp shown above (Sc. #242) was issued on May 3, 1954 to celebrate the Visit of Queen Elizabeth II and the Duke of Edinburgh.

The design is identical to the 1938 3 P. denomination stamps, with Queen Elizabeth's portrait replacing that of King George VI, and with the addition of the inscription "ROYAL VISIT 1954" at the bottom.

In November 1953, Queen Elizabeth II, accompanied by Prince Phillip, embarked on her first tour of the Commonwealth since becoming Queen. The royal couple toured for nearly six months, returning to the United Kingdom in May 1954.

From Tobruk, Libya, the royal entourage boarded the Royal Yacht Britannia to sail across the Mediterranean. They arrived in Malta on May 3, 1954, where they stayed for several days. 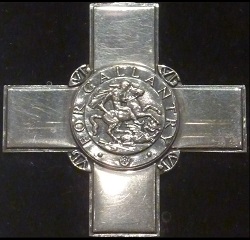 The George Cross was instituted on September 24, 1940 by King George VI.  At the height of the Blitz, there was a strong desire to reward the many acts of civilian courage. The existing awards for civilians were deemed inadequate for the new situation, therefore, it was decided that the George Cross would be instituted to recognize civilian gallantry in the face of enemy action.

The central design features the famous engraving of "St. George and the Dragon" by Benedetto Pistrucci (1783-1855). This engraving has been used for British coins and medals since 1817.  A garter around the engraving features the inscription, "FOR GALLANTRY".