Malta stamps, during 1948, celebrated the resumption of internal self-government in the colony.

Between 1933 and 1946, the constitution of Malta was suspended, and the islands returned to British rule as a crown colony.  Malta was very important to the Allied nations during World War II.  The British Mediterranean Fleet was headquartered there early in the war.  The Allied invasion of Sicily was launched from Malta.  And prior to the Yalta Conference, Roosevelt, Churchill, and Stalin had met in Malta to begin discussions on the post-war division of Europe.

In 1947, a new constitution was implemented and internal self-government in Malta was re-established.

What happens now?  Of course, we have to take ALL the contemporary definitive Malta stamps of King George VI that are in existence and overprint them, in celebration of the colony's new political status! 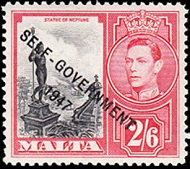 On November 25, 1948, all the contemporary pictorial definitive stamps of King George VI were overprinted "SELF-GOVERNMENT / 1947".  Some of the lower-denominations of this series were also issued, in new colors, on January 8, 1953, and they were overprinted with the same overprint.  They are all included above.

The vignettes on these stamps have already been described in previous sections of this category.

The four Malta stamps shown above (Sc. #225-28) were issued on October 10, 1949 to commemorate the 75th Anniversary of the founding of the Universal Postal Union.

The three stamps shown above (Sc. #229-31) were issued on December 1, 1950, to celebrate the Visit of Princess Elizabeth and Prince Philip. 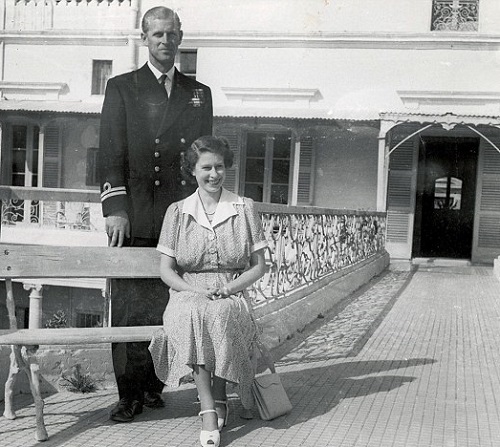 Prince Philip was stationed in Malta with the Royal Navy from 1949-1951.  Princess Elizabeth spent several months there, staying at the Villa Guardamangia, during that time period.

The photograph above was taken just a few days before her 24th birthday in 1950.  It was during this visit that the royal couple announced that Princess Elizabeth was pregnant with their second child (Prince Charles).

Simon Stock was a 13th Century Englishman and an early Prior General of the Carmelite Order.  The Virgin Mary is traditionally said to have appeared to him and given him the Carmelite habit, the Brown Scapular, with a promise that those who die wearing it will be saved.