Only Malta stamps of the 1/2 Penny denomination were issued between 1860 and 1885.  They were printed in various shades of Buff and on papers with various watermarks.  This would explain the abundance of Great Britain stamps that were used concurrently with the 1/2 Penny stamps of Malta during this time period.

The two 1/2 Penny denomination stamps shown above, one on white paper and the other on bluish paper, were issued between 1861 and 1863.  These Malta stamps are typographed, perforated 14, and they are printed on unwatermarked paper.

Between 1865 and 1879, the 1/2 Penny denomination with WMK1 - the Crown & CC watermark - was also issued with other perforation gauges.  They are as follows: 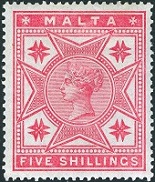 On January 1, 1885 the color of the 1/2 Penny denomination stamp was changed, and five new Malta stamp denominations were introduced.  These Malta stamps are all perforated 14, and they are printed on paper with WMK 2 - the Crown and CA watermark.


In 1886, the new large-format 5 Shilling stamp shown above was issued.  This new high-denomination stamp is printed on paper with WMK1 - the Crown and CC watermark.

Between 1899 and 1901, the first pictorial definitive stamps of Malta appeared.  The three lower denominations are shown above.  These stamps are all engraved, and they are printed on paper with WMK 2 - the Crown and CA watermark.

The two high denomination pictorial definitive postage stamps shown above were also issued in 1899.  These Malta stamps are engraved, and they are printed on paper with WMK 1 - the Crown and CC watermark.

Melita is the personification of Malta and of the Maltese people.  The name originated from the Ancient Roman town of Melite, which was destroyed and re-built several times over the centuries.  It is now the town of Mdina.

Melita appears on the 1899 Two Shilling Six Pence stamp wearing a loose-fitting garment and a helmet.  She holds a sword in one hand and a shield, emblazoned with the Maltese Cross, in the other hand.  Behind her are the flags of Malta and of the Order of Saint John.

In A.D. 60, the Apostle Paul (A.D. 5 - A.D. 67) was being taken from Judea to Rome, to be put on trial for inciting rebellion.  The Roman galley was wrecked during a violent storm, and St. Paul and the other 274 people on board swam safely to an island, what is today, St. Paul's Island in Malta.  Paul converted the Roman Colony of Malta's governor and its  inhabitants to Christianity, giving Malta the distinction of being the first Roman Colony to be converted to the new faith.

The design is a modified version of a 19th Century drawing by Paul Gustave Doré (1832-1883), showing the Shipwrecked St. Paul on land, with the Roman galley sinking in the distance.


Just about all British colonial stamps are printed on paper with the Crown Colonies (CC) or Crown Agents (CA) watermarks.

The two watermarks used for the stamps of Malta, from 1863 through 1902, are illustrated above.  They will be referred to by their watermark numbers in the text descriptions.

These errors have the revaluation spelled as "ONE / PNNEY".  They are actually quite inexpensive these days.