The commemorative Luxembourg stamps of 1922 to 1939 feature the World's first souvenir sheet, philatelic exhibitions, and Luxembourg's independence as a sovereign Grand Duchy, in the aftermath of the Belgian Revolution. 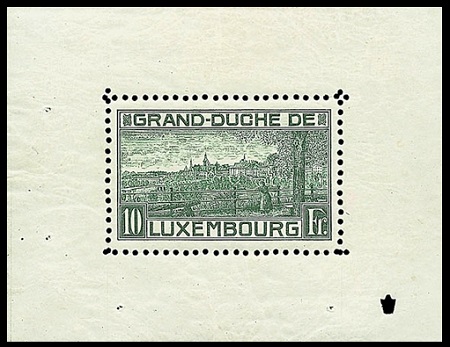 The design of the 10 F. denomination stamp features a View of Luxembourg City from the park in front of Fort Thüngen.

This is officially considered to be the World's first philatelic souvenir sheet or miniature sheet.  Earlier Luxembourg miniature sheets were sold in 1906 and 1921, however those sheets contained contemporary definitive postage stamps that were readily available for purchase at post offices.

Princess Elizabeth (1922-2011), the Duchess von Hohenberg, was born on December 22, 1922 to Grand Duchess Charlotte of Luxembourg and Prince Felix of Bourbon-Parma. 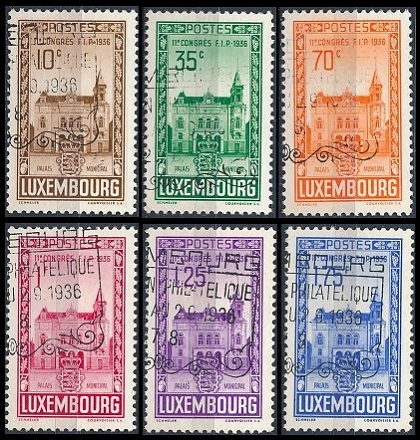 The six commemorative Luxembourg stamps shown above (Sc. #200-205) were issued on August 26, 1936 to publicize the 11th Congress of the International Federation of Philately (FIP).

The common design of the stamps features the Municipal Palace in Luxembourg City, where the FIP Congress was held. 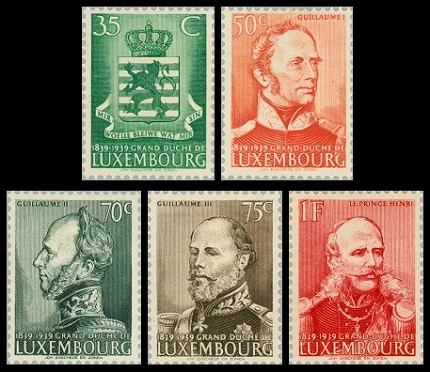 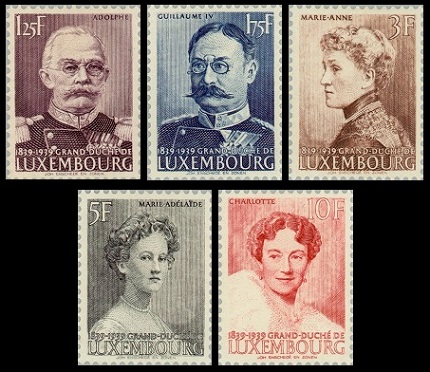 The ten Luxembourg stamps shown above were issued on May 27, 1939 to commemorate the 100th Anniversary of Luxembourg's Independence.

The designs feature portraits of the Grand Dukes and Grand Duchesses that have ruled Luxembourg between 1839 and 1939.

The descriptions and catalog attributes are as follows: 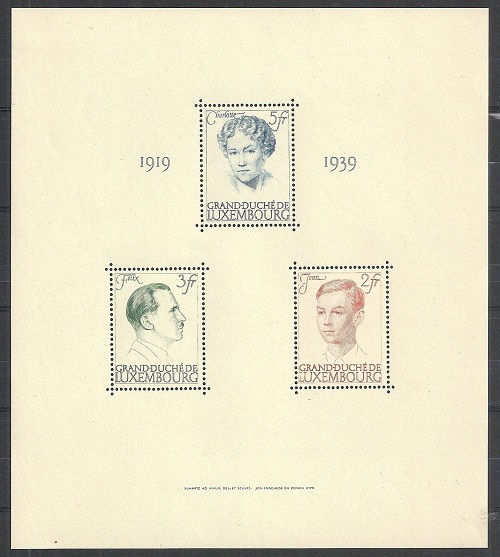 The commemorative Luxembourg souvenir sheet shown above (Sc. #217) was issued on December 20, 1939 to celebrate the 20th Anniversaries of the Reign of Grand Duchess Charlotte and of the Grand Duchess' Marriage to Prince Felix of Bourbon-Parma.


Return to Luxembourg Stamps
From Commemoratives of 1922-1939

These stamps are very different than the regularly issued definitive postage stamps.  They were engraved on laid paper, and they are imperforate.  These stamps were only available for sale at the philatelic exhibition in August 1922.

The 2 F. denomination commemorative Luxembourg stamp shown above (Sc. #216) was issued on September 18, 1939 to celebrate the Elevation of Mondorf-les-Bains to Town Status.

The design features an Allegory of Medicinal Baths.