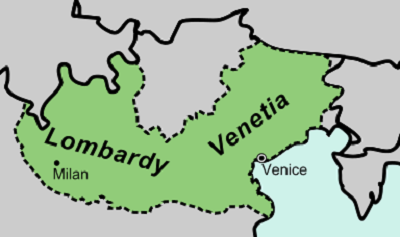 The first definitive Lombardy-Venetia stamps were issued in 1850.   Their appearance was very similar to the contemporary postage stamps of the Austrian Empire, with the exception that they were denominated in Italian Centesimi and Soldi.

The population of Lombardy and Venetia, located in the extreme northern part of the Apennine Peninsula, was overwhelmingly ethnic Italian, however, they were not exactly "Italian states".  After the downfall of Napoleon Bonaparte and the Napoleonic Kingdom of Italy, the Treaty of Paris awarded the former Duchy of Milan (Lombardy) and the former Republic of Venice to the Austrian Empire.  The subsequent Congress of Vienna combined these two lands into a single kingdom, ruled in personal union by the Hapsburg Emperor of Austria.  The emperor was represented by Viceroys, appointed by the Imperial Court in Vienna, and they were resident in both Milan and Venice. 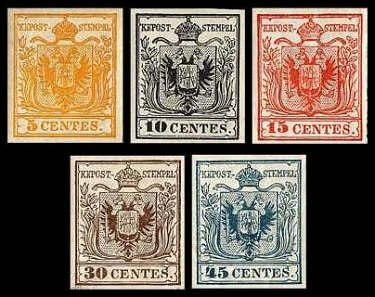 The five definitive Lombardy-Venetia stamps shown above were issued in June 1850, with additional printings through 1857.

The 1850 printings are typographed on hand-made paper of varying thickness that is watermarked "K.K.H.M." in large letters across the sheet.  Many of these stamps will, however, appear to be unwatermarked.  Stamps showing the sheet watermark are actually very scarce.

The 1854-1857 printings are typographed on machine-made paper that is unwatermarked.

There are three types of the 15 C. and 45 C. denominations, which are described below.  For details, please refer to the major catalogs. 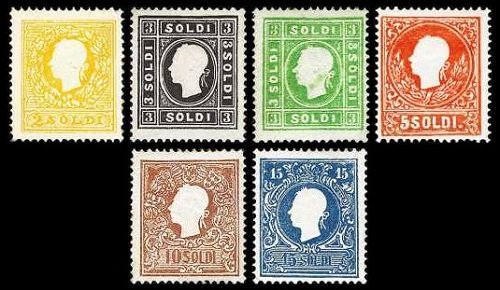 The six definitive Lombardy-Venetia stamps shown above were issued between 1858 and 1862.  They are embossed on unwatermarked paper, and they are perforated 14 1/2.

The common design features colored frames, along with the colorless left-facing profile of Emperor Franz Josef I.

All of these denominations were issued in two types, which are described below.  For details, please refer to the major catalogs.

The reprints of these stamps are all Type 2, and the perforation gauges usually range between 10 1/2 and 13. 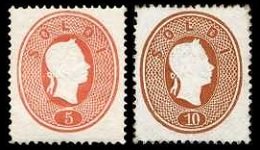 The two larger-format definitive Lombardy-Venetia stamps shown above were issued in 1861 and 1862.  They are embossed on unwatermarked paper, and they are perforated 14.

The common design features colored frames, along with the colorless right-facing profile of Emperor Franz Josef I. 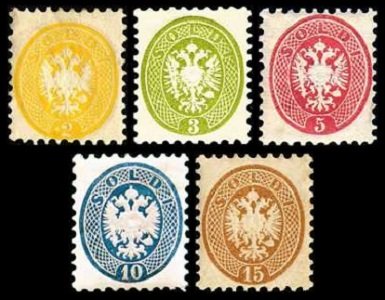 The five new definitive Lombardy-Venetia stamps shown above were issued between 1863 and 1864.

The common design features colored frames and the embossed Coat of Arms of Lombardy-Venetia.

The Scott catalog attributes, for stamps that are unwatermarked and perforated 14, are as follows.

The Scott catalog attributes, for stamps that are watermarked BRIEF-MARKEN in large capitals across the sheet and perforated 9 1/2, are as follows.

After October 21, 1866, Lombardy-Venetia stamps were replaced by those of the Kingdom of Italy. 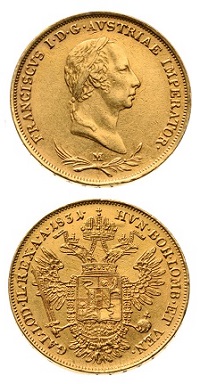 The three newspaper tax Lombardy-Venetia stamps shown above (Sc. #PR1-PR3) were issued between 1858 and 1859.  They are typographed on unwatermarked paper, imperforate, and they are denominated in Austrian Kreuzer.

Between 1853 and 1858, the Austrian 2 Kreuzer green newspaper stamp (Austria Sc. #PR1) was used in Lombardy-Venetia, valued at ten Centesimi.