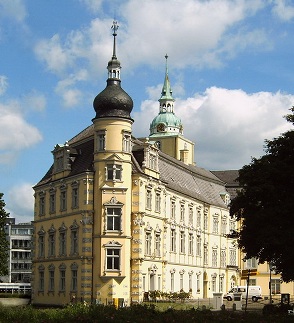 Oldenburg Castle
By: Marvins21 - From: Wikimedia

Local stamps for Oldenburg were produced during 1948. These stamps, in the form of two souvenir sheets, were actually a private issue by the German Red Cross to raise money for reconstruction projects around Oldenburg.

The city of Oldenburg and the surrounding area survived World War II in pretty good shape, as the Allied bombing around the city was minimal during the war. The population of Oldenburg and its neighboring towns, located in West Germany, increased tremendously after the war, as this area became one of the main destinations for German refugees from the Soviet occupation zone. 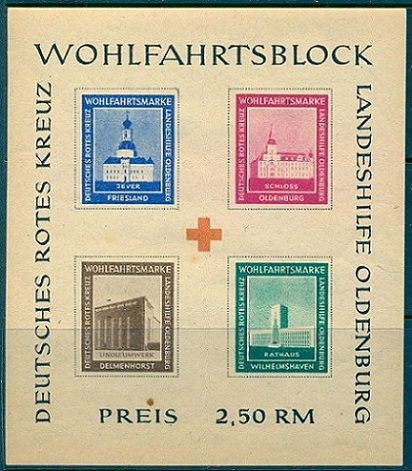 The sheet sold for 2.50 Reichmarks, with all the proceeds going to the German Red Cross. The souvenir sheet was not valid for postal use.

The four "postage stamp" designs in the souvenir sheet depict, from top left to lower right, a building in Jever, Oldenburg Castle, the Linoleum Factory in Delmenhorst, and the City Hall in Wilhelmshaven.