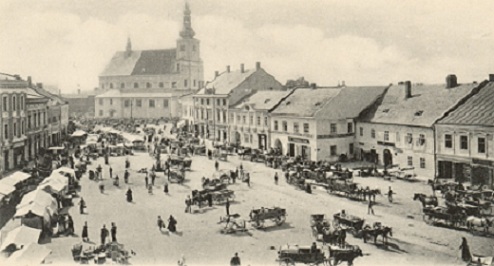 Local stamps were issued in Holešov in 1945, following its liberation from the Nazis. The Adolph Hitler definitive stamps of Bohemia and Moravia, issued in 1942, were utilized, and obliterating overprints were applied to them.

Holešov is located in the Hostýn Hills, in the Western-most part of the Carpathian Mountains, not too far from Vienna, Austria. During the 19th Century, the town was within the Austrian Empire; after World War I, it was within the nation of Czechoslovakia; and after the Nazi invasion, it was within the Protectorate of Bohemia and Moravia.

The town was inhabited by a large Jewish community until World War II, during which nearly the entire Jewish population was murdered, and their historic synagogue was destroyed. 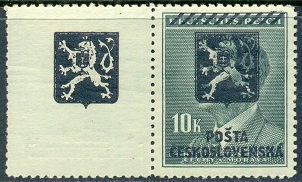 The four stamps shown above were produced for Holešov during the Summer of 1945. These stamps are the 10 K., 20 K., 30 K., and 50 K. high-values from the 1942 Hitler definitive postage stamp issue of the German Protectorate of Bohemia and Moravia.

I have seen an exhibit page on the internet, containing a cover postmarked on July 21, 1945. I would presume that these stamps were issued and / or used around that time.