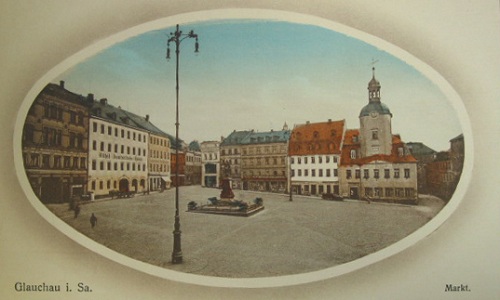 Glauchau
From an Old Postcard

Local stamps were produced during 1945 for the Soviet occupation zone town of Glauchau in Saxony. The town is situated on the Mulde River, north of Zwickau and west of Chemnitz.

Glauchau was founded by the Sorbs and Wends, and the old castle there dates to the 12th Century. Glauchau's twin city is Lynchburg, Virginia.

During 1945, existing stocks of the definitive postage stamps and official postage stamps of the Third Reich were utilized to create local stamps for Glauchau. These Third Reich issues were overprinted with obliterating bars, "Kreis / Glauchau" or "District of Glauchau" in different styles, and in most cases, they were re-valued with new denominations.

At the beginning of June 1945, the Third Reich Adolf Hitler definitive stamp series of 1941-1944 was overprinted and revalued (or not revalued) in the style of the examples shown in the first row above.

Many of these Glauchau local stamps also exist with double overprints and shifted overprints.

In the middle of June 1945, ten denominations of the Third Reich Nazi Party Official Stamp series of 1942 were overprinted and revalued in the style of the examples shown in the second row above. These stamps were all re-valued to 15 Pf.

At the same time, thirteen denominations of the Third Reich Official Stamp issues of 1934-1942 were overprinted and revalued in the style of the examples shown in the third row above. These stamps were all re-valued to 25 Pf.

In August 1945, the six denominations of the Third Reich Adolph Hitler definitive stamp series were overprinted in the style shown in the last row above. These overprints were never authorized for use, and they were not officially issued.