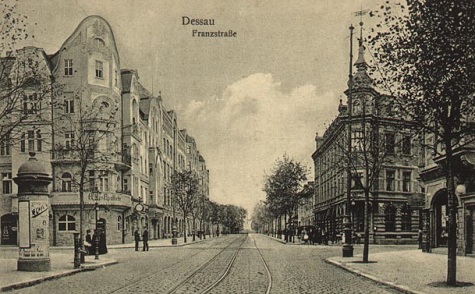 Dessau
From an Old Postcard

Local stamps were produced during 1946 for the Soviet occupation zone town of Dessau in Province Saxony.

Dessau dates from the 13th Century, and, from 1570, it was the capital of the Principality of Anhalt.

The city was almost completely destroyed during Allied bombings in March 1945. After World War II, as part of the German Democratic Republic, Dessau was rebuilt with the typical concrete slab architecture of the DDR, and it became one of the major industrial centers of East Germany. It wasn't until after the German reunification of 1990 that the restoration of many of the old historical buildings began.

In April 1946, the Province Saxony reconstruction set was privately overprinted "Dessau" for local usage. They were sold through the Halle post office. Both the perforated and imperforate sets are shown in the images above.