An additional set of Liechtenstein stamps, featuring rare paintings in the Principality of Lichtenstein Art Gallery in Vaduz, was issued on February 5, 1953.  They are shown above (Sc. #266-69).

The new set of stamps depicts: 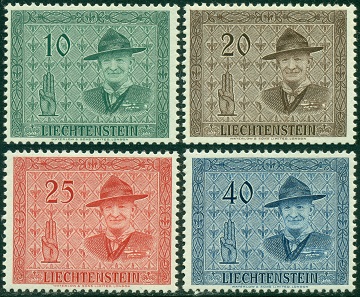 The four stamps shown above (Sc. #270-73) were issued on August 4, 1953 to celebrate the International Scout Conference in Vaduz.  All of the stamps depict Lord Baden-Powell (1857-1941), the founder of the Boy Scout movement.

The National Museum of Liechtenstein contains 42 exhibition rooms featuring the cultural history and national history of Liechtenstein.  The thematically structured permanent exhibits are categorized as follows: 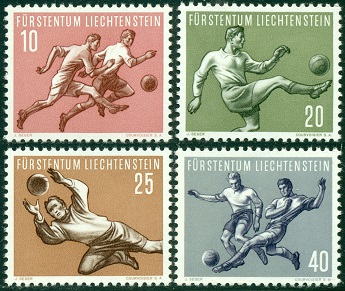 The first in an annual series of stamps featuring sports themes was issued on May 18,1954.  Each of the stamps shown above (Sc. #277-80) depict soccer players in various playing positions.

On September 18, 1954, the 1951 semi-postal stamp issues, depicting rare paintings in the Principality of Lichtenstein Art Gallery in Vaduz, were re-issued and re-valued with new regular postage denominations, as shown above (Sc. #281-83). 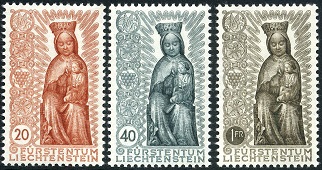 These three stamps were issued December 16, 1954, near Christmas-time, to celebrate the upcoming Marian Year.  Each of the stamps show a 14th Century wood carving of an enthroned Madonna.