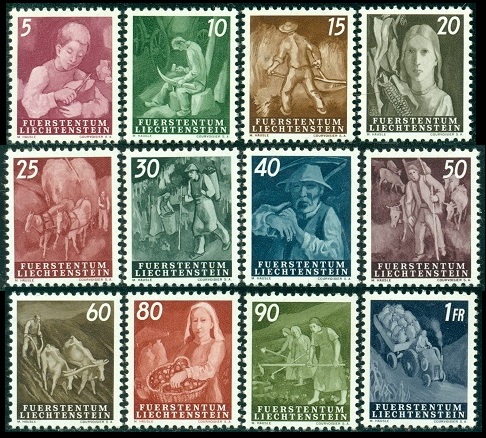 May 3, 1951, a series of new regular postage Liechtenstein stamps were issued, replacing the landscape definitive stamp issues of 1944-1949.  These new definitive postage stamps featured Liechtenstein occupations, and they are all shown above (Sc. #247-58).

The 10 Rp. and 20 Rp. denominations were issued in both sheets and in coils. 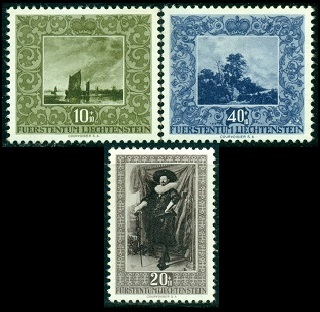 The three stamps shown above (Sc. #B19-21) were issued on July 24, 1951.  They feature rare paintings in the Principality of Lichtenstein Art Gallery in Vaduz. 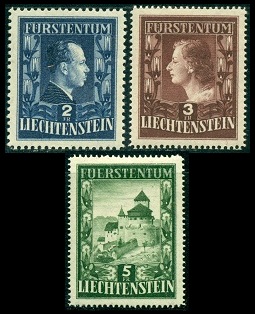 Three new high-denomination Liechtenstein stamps were also issued during 1951 and 1952.


The 5 Franken high-denomination definitive postage stamp shown at the bottom of the scan above was issued on September 25, 1952.  The stamp pictures a View of Vaduz Castle.  These stamps were printed in sheets of nine which can be collected as a souvenir sheetlet. 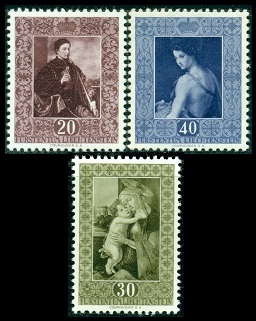 The three stamps shown above (Sc. #261-63) were issued on March 27, 1952.  They feature rare paintings in the Principality of Lichtenstein Art Gallery in Vaduz.