During 1949, the two Liechtenstein stamps shown above were added to the contemporary Landscape Definitive postage stamp series of 1944-1945.

The stamp on the right (Sc. #239) was issued December 1, 1949.  It is a re-issue of the 5 Rp. denomination, originally issued in 1944, however the color has been changed from the original slate green and buff to dark brown and buff.  The design features a view of the village of Bendern. 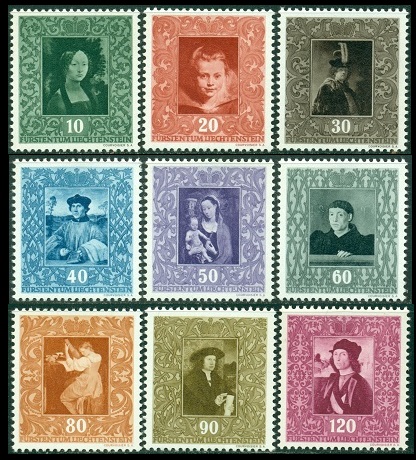 The nine stamps shown above (Sc. #227-35) were issued between March and May of 1949.  They were issued in sheets of 12 and feature rare paintings in the Principality of Lichtenstein Art Gallery in Vaduz. 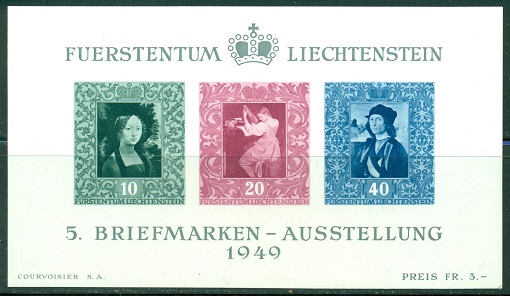 The souvenir sheet shown above (Sc. #238) was issued August 6, 1949 to mark the occasion of the Lichtenstein Philatelic Exhibition in Vaduz.  The sheet contains three of the stamps from the paintings set issued earlier in the year.  It sold at the exhibition for 3 Franken.

The stamp shown above (Sc. #237) was issued on May 23, 1949 to commemorate the 75th Anniversary of the UPU.  The design depicts a Posthorn and Crown over a Map of the World. 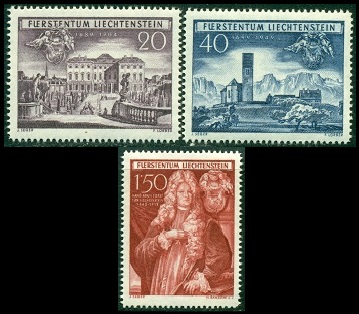 The three Liechtenstein stamps shown in the image above (Sc. #240-42) were issued on November 15, 1949 to commemorate the 250th Anniversary of the purchase of the former Dukedom of Schellenberg.

The set of Liechtenstein stamps shown above (Sc. #243-45) is the third and final part of the series of stamps featuring game animals.

These three stamps were issued March 7, 1950, and they depict: a Roe Deer, a Black Grouse, and a Badger. 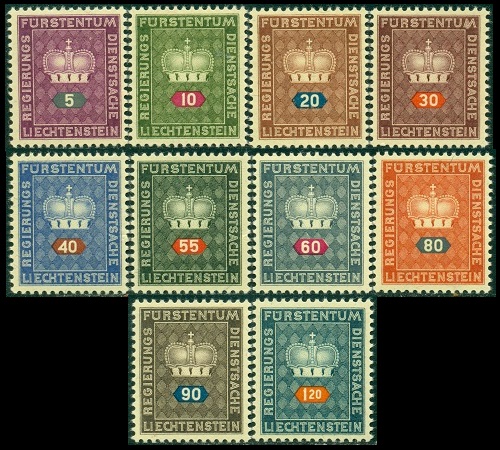 The ten Liechtenstein official stamps shown above (Sc. #O37-46) were issued during 1950.  The stamps are engraved and the value tablets are typographed.  The numerals are printed in a narrow, Gothic font.  The stamps are printed on granite, buff-tinted paper, and they are perforated 11 1/2.

The final postage stamp issue of 1950 was a re-valued version of the UPU Anniversary stamp issued on May 23.