When Prince Albert's father ascended to the throne as King George V in 1910, Albert's older brother, Prince Edward (called - David) became the Prince of Wales and the heir to the British throne.  The younger Prince Albert was not the heir to the throne, and it was not assumed that he would ever seriously be in the line of succession, or so everyone thought at the time!

The British colony of Newfoundland issued a beautifully engraved set of stamps for the coronation of King George V in 1911.  The stamps show portraits of King George V, Queen Mary, and their six children.

Prince Albert had a very unpleasant childhood, which scarred him for the rest of his life.  As a very young child, he was mistreated by a nanny that favored his older brother Edward.  He had chronic stomach problems.  He had knock-knees and was forced to wear metal splints that were extremely painful.  He was left handed and was forced to write right handed.  At a very young age, he developed a stammer, which would plague him until his death.  He was also extremely intimidated by his father, King George V, who had little patience for Albert's physical difficulties.  As a result of these things, the young Albert became very shy, self-conscious, and terrified of being seen or heard in public.

Prince Albert served in the Royal Navy and the Royal Air Force during World War I.  In 1920, he was made the Duke of York and encouraged to take on more royal duties by his father, which he did with reluctance. 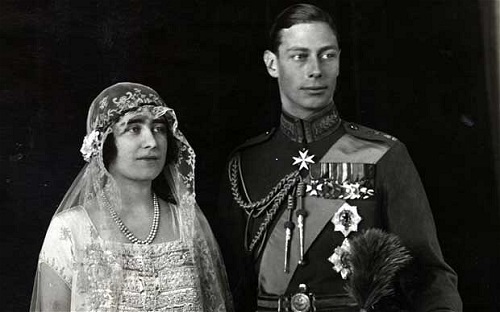 On April 26, 1923, Albert married Lady Elizabeth Bowes-Lyon.  He was so comfortable with her that he did not stammer at all, when they were together.  Elizabeth was a very strong, high-spirited, self-assured woman of Scottish descent who became instrumental in helping Albert to overcome his disabilities throughout the remainder of his life.  Albert and Elizabeth had two children, Princess Elizabeth Alexandra Mary (called Lilibet - the future Queen Elizabeth II) in 1926 and Princess Margaret Rose in 1930.

On October 31, 1925, Prince Albert, the Duke of York, was asked to speak at the closing ceremonies of the British Empire Exhibition at Wembley Stadium.  With the prince's difficulty in speaking, due to his stammer, the event was a disaster, and it was extraordinarily humiliating to both him and Elizabeth.

Shortly afterwards, Elizabeth arranged for the Duke of York to meet with Lionel Logue, an Australian speech defects therapist practicing in London. Prince Albert worked frequently with Lionel Logue on elocution and breathing exercises, and in time, his speaking abilities did improve.  The two of them eventually became the best of friends, and Lionel Logue was there to help and support him in almost all of his public speaking engagements for the rest of his life.

But for occasional royal speaking appearances, the Duke and Duchess of York continued to live a quiet family life with their two children.  In about 1935 though, the health of King George V began failing. 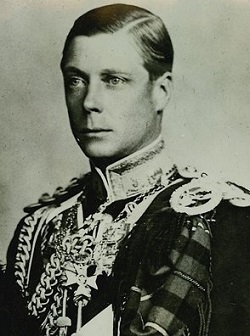 The heir to the throne was Albert's older brother, Prince Edward, the Prince of Wales.  To the dismay of King George V, Prince Edward led a rather reckless lifestyle.  He did not act with the dignity expected of a soon-to-be British king, he did not take his royal duties very seriously, and he had the habit of having affairs with many married women.

King George V had a premonition that something bad was going to happen when Edward became king.  It has been written that King George V stated, "I pray to God that my eldest son will never marry and that nothing will come between Bertie and the throne".  It is also known that King George V had once told Prince Albert that his brother would ruin himself and the monarchy within a year and that it would be up to Albert to restore dignity of the British monarchy.  Unfortunately for the Duke and Duchess of York, and for the British Empire as a whole, King George V was absolutely correct.

Facing insurmountable obstacles, and with his commitment to marry Wallace Simpson, King Edward VIII was compelled to abdicate on December 10, 1936, after a reign of 11 months.  With no children, the fate of the British monarchy would now fall on King Edward's younger brother. 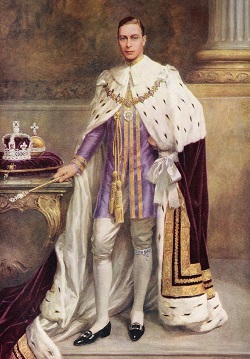 On December 11, 1936, the man who was not expected to ever be king, and the shy, self-conscious man that DID NOT WANT TO BE king, was proclaimed king.  To emphasize continuity with his father and to restore confidence in the monarchy, Albert chose to be called King George VI.  The coronation of King George VI and Queen Elizabeth took place on May 12, 1937.

Just two years into the reign of King George VI, in September 1939, Germany invaded Poland, marking the beginning of World War II.  Britain then declared war on Germany.  The king and queen resolved to stay in London, and they sent their children to live in nearby Windsor Castle. 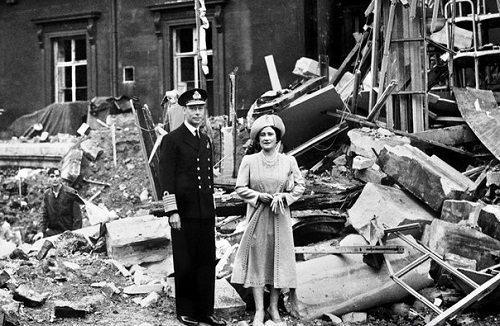 The first German bombing raids on London, in September 1940, were devastating, killing many civilians on the East End.  These raids were continuous throughout the war.  On September 13, 1940, Buckingham Palace was bombed, narrowly missing the king and queen, who were very near where the bombs struck.  The queen defiantly declared, "I am glad we have been bombed.  It makes me feel we can look the East End in the face.".  The royal family shared the same dangers and deprivations as the rest of the country, even being on water and food rationing.

The king and queen made morale-boosting visits throughout the war, visiting bombed sites and munitions factories.  The king visited troops in North Africa and Malta in June 1943, Normandy in June 1944, Southern Italy in July 1944, and the Low Countries in October 1944.  The high public profile and unrelenting dedication of the King and Queen established them as the symbols of British national resistance.

The stress of the war had taken a huge toll on the king's health, and in the years after the war, his health deteriorated rapidly.  During this time, his eldest daughter, Princess Elizabeth, the heir to the throne, took on more and more of his royal duties.  He continued to perform his duties, whenever he was physically capable.

By the end of 1951, King George VI had become so weak that his Christmas broadcast had to be recorded in short segments and then edited together.  On January 31, 1952, the king went to the London airport to see his daughter Elizabeth off on a Commonwealth tour.  Six days later, on February 6, 1952, King George VI died.  His oldest daughter, in Kenya at the time, was immediately acclaimed Queen Elizabeth II.

I will never forget the commentary by Russell Baker at the end of the Masterpiece Theater production of the movie Bertie and Elizabeth.  He cited the famous quotation of Lord Nelson (1758-1805) at the Battle of Trafalgar in 1805.  "England expects that every man will do his duty".  King George VI had done his duty with honor.  Something that could never be said about his older brother, King Edward VIII.

Today, the man that DID NOT WANT TO BE king is revered as one of the most beloved monarchs of the 20th Century!