To avoid confusion between his and his father's name, we'll refer to him as Prince Albert Edward, or just Edward, for the balance of this article. 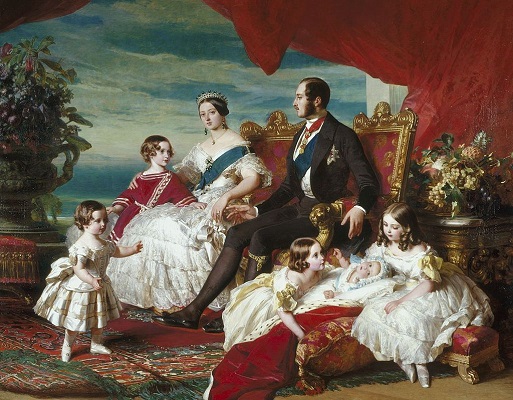 Next to Queen Victoria - Top to Bottom:

Other Children Not shown in the painting:

Prince Albert Edward was created the Prince of Wales on December 8, 1841.  His parents were determined that the prince should have an education that would prepare him for being a model constitutional monarch.  At age seven, Albert Edward embarked on a rigorous educational program devised by his father.  He tried to meet the expectations of his parents, but he did not do well in his scholastic studies.

Prince Albert Edward had hoped to pursue a military career, but his mother vetoed that option.  In 1860, as the Prince of Wales, he was sent on a royal tour of North America, which included the United States.  His demeanor and his good sense of humor made him very popular abroad.

Back at home, he was somewhat of a playboy, and through his indiscreet behavior, he became involved in a public scandal that embarrassed the royal family.  His father even went to Cambridge to personally reprimand the prince for his undignified behavior.

Prince Consort Albert, Albert Edward's father, died of Typhoid fever in December 1861, not too long after visiting him at Cambridge.  His mother, Queen Victoria, was inconsolable, and she blamed the young prince for his father's premature death.  The queen wore mourning clothing and withdrew from public duties for the rest of her life.  At the time, she regarded the young Prince of Wales with disdain, as being frivolous, indiscreet, and irresponsible.  The queen wrote to her oldest daughter, Princess Victoria, "I never can, or shall, look at him without a shudder". 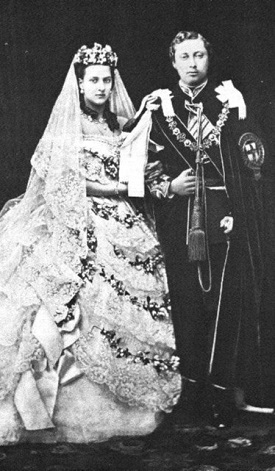 Princess Victoria, Edward's older sister, had introduced him to Princess Alexandra of Denmark (1844-1925) in September 1861.  He and Alexandra were married on March 10, 1863 in St. George's Chapel at Windsor Castle.  The Prince and Princess of Wales established their residences at Marlborough House in London and at Sandringham House in Norfolk, where they entertained on a lavish scale.

Edward had mistresses throughout his married life.  They encompassed the entire social scale, from aristocratic women, to actresses, and even to prostitutes.  It is believed that Princess Alexandra was aware of many of these affairs and that she accepted them.

During his mother's widowhood, Edward pioneered the idea of royal public appearances, as they are today.  However, his mother DID NOT allow Edward an active role in running the country until 1898.  He was sent summaries of important government documents, but he was not allowed access to the originals.

In 1875, he embarked on an eight month tour of India, during which one of his advisers remarked about his "habit" of treating all people the same, regardless of their social station or color.  Edward was a patron of the arts, and he also enjoyed country sports, particularly hunting and horse racing.  He ordered all the clocks at Sandringham set a half hour ahead, to allow more daylight time for shooting.  This tradition of "Sandringham Time" continued until 1936, when it was abolished by King Edward VIII. 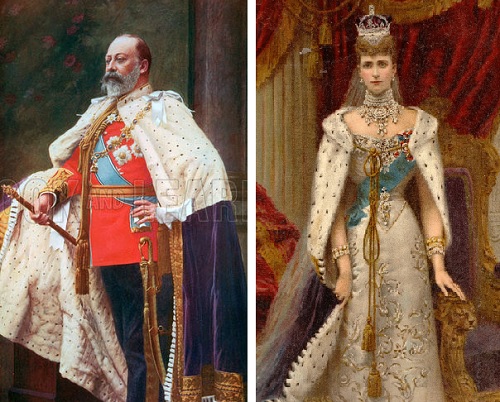 On January 22, 1901, after a reign of 64 years, Queen Victoria died.  The Prince of Wales, now 60 years old, finally ascended to the throne.  Queen Victoria had wanted him to use Albert Edward for his name, but the new king chose to be called King Edward VII.  The new king declared that he did not wish to "undervalue the name of Albert" or to diminish the name of his father, with whom the "name should stand alone".

King Edward VII and Queen Alexandra were coronated on August 2, 1902 at Westminster Abbey.  Edward refurbished the royal palaces, re-instituted traditional ceremonies, such as the "Opening of Parliament", which his mother had forgone, and established new orders of honors, to recognize contributions to the arts and sciences.

The time of the very short reign of Edward VII has been named the Edwardian Age.  It has been written that Edward had a tremendous zest for pleasure, but that he also had a strong sense of duty.  During his reign, he traveled extensively to Europe, fostering better relations between Britain and the European countries.  He made peace with France, which had been a long-time adversary of Britain for hundreds of years.  For these efforts, he was nicknamed "Edward the Peacemaker".

Edward's health had never been very good though, even as a young prince.  In April 1910, the king came down with a severe case of bronchitis, but he refused to take time off from his royal duties to rest.  On May 6, 1910, the king had several heart attacks, but he insisted on going on with his royal duties.  That evening, he died in his sleep, ending a reign of barely nine and one half years.  For his short reign though, he made an impression on 20th Century history that will never be forgotten.