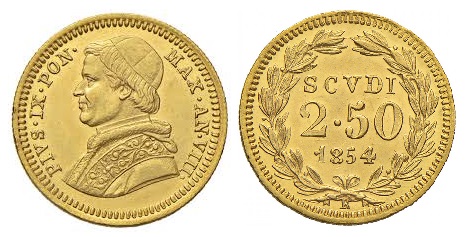 The Papal States, also known as the Roman States or the States of the Church, were established by Pope Stephen II (Lived: 715-757, Pope: 752-757) in the 8th Century, and for the next 1,100 years, this absolute Papal monarchy would rule over most of the central Italian Peninsula.  The territories of the Papal States were greatly reduced during the Italian Wars of Independence (1848-1866), and they were finally conquered in 1870.  The army of King Victor Emmanuel captured Rome on September 20, 1870, and the Papal States ceased to exist.  In 1871, the capital of the Kingdom of Italy was moved from Florence to Rome, and the struggle for Italian unification finally came to an end.

With all the forgeries and unofficial reprints, the Italian States stamps of the Papal States can be a "philatelic minefield" for the collector that is not familiar with them.  But, if care is taken in examining the stamps, and close attention is paid to the design details, they are relatively safe to collect.

The following rule can save the collector a lot of agony and money.  If a high-priced stamp has not been properly attributed, authenticated, and / or certified, it may be wise to assume, until proven otherwise, that the stamp could be a possible forgery or unofficial reprint. 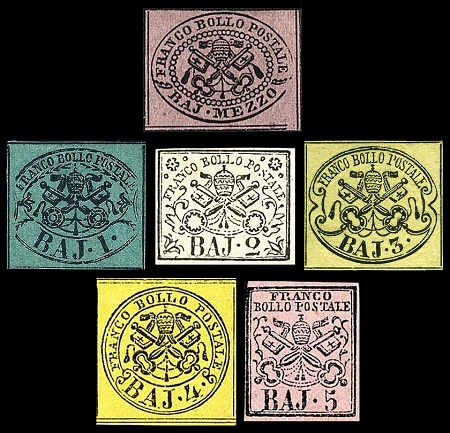 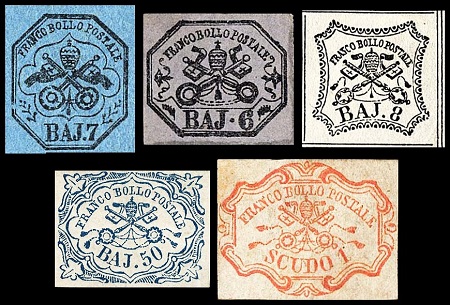 The eleven definitive Italian States stamps of the Papal States shown above were issued on January 1, 1852.  They are typographed on unwatermarked paper, and they are imperforate.

The illustration shown above is from the Serrane Guide.  It features the major attributes of the original stamps of 1852 and of the Geneva Forgeries, for the 05 B., 07 B., 50 B., and the 01 S. denominations.

The Serrane Guide also offers the following notes on the characteristics of other forgeries (not including the Geneva Forgeries shown above) of the 1852 Papal States stamps. 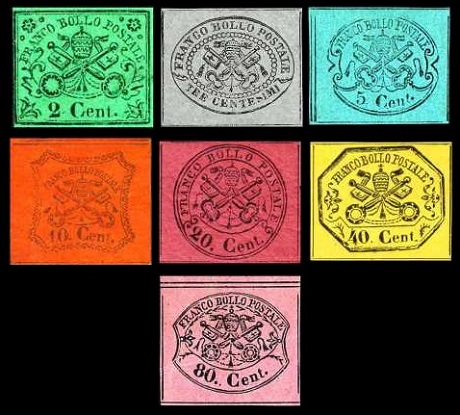 The seven definitive Italian States stamps of the Papal States shown above were issued on September 21, 1867.  They are typographed on unwatermarked, glazed paper, and they are imperforate.

This set was made necessary by the change in currency from the Scudo (Bajocchi) to the Lira (Centesimi). 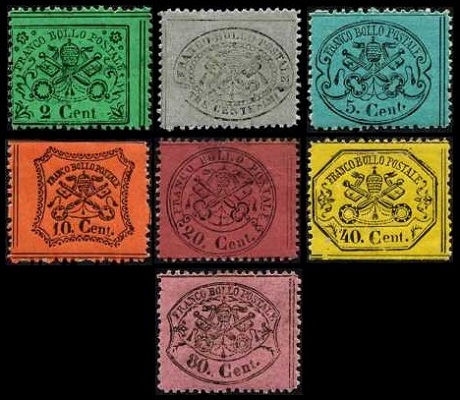 The seven definitive Italian States stamps of the Papal States shown above were issued on March 12, 1868.  They are typographed on unwatermarked, glazed or un-glazed paper, and they are perforated 13.

The so-called unofficial reprints (forgeries) of the Italian States stamps of the Papal States, issued between 1867 and 1868, are easy to identify.  The two images shown above illustrate the differences.  This is the reason why it is very important to collect examples of these stamps that show at least some of the separator lines.

The so-called reprints were made at several times to meet collector demand.  They were made from plates reproduced from the original plates.  The impressions are usually flattened, and they have many flaws.  On the perforated reprints, the perforations often differ, as well, sometimes being gauge 11 1/2 or 12.

There are also several different classes of forgeries.  They need to be compared against the originals, as most of the forgeries do not have exactly the same design characteristics.  There are many deceptive forged postmarks, as well.


Italian States stamps of the Papal States were replaced by those of the Kingdom of Italy in 1870. 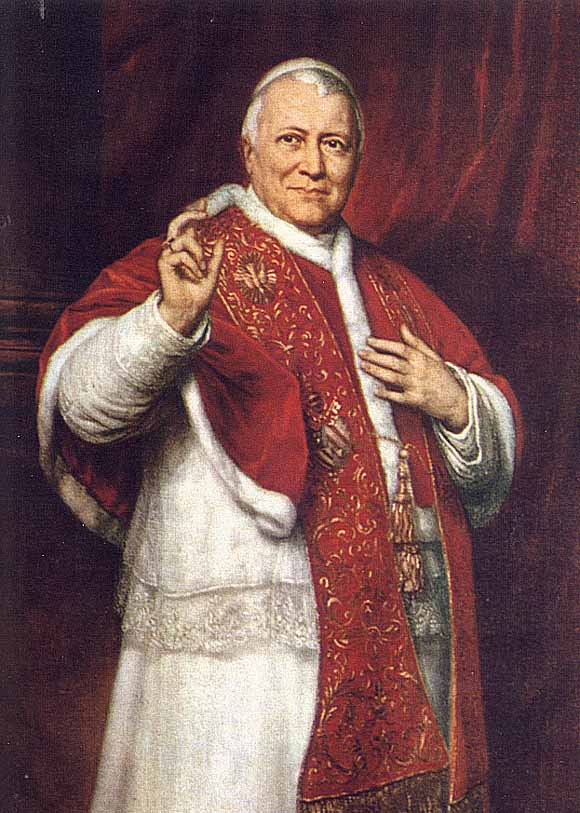 Pope Pius IX (Lived: 1792-1878, Pope: 1846-1878) was the last sovereign ruler of the Papal States.  He is the longest serving non-Apostolic pontiff, having reigned for almost thirty-two years.

As of 1870, the days of the Pope being a temporal, as well as a spiritual, monarch were gone.  Vatican City would not become a sovereign state again, until 1929.

The Pope rejected the offer.  After the fall of Rome in September 1870, the Pope frequently referred to himself as the "Prisoner of the Vatican".

Pope Pius IX did manage to outlive his arch-enemy, King Victor Emmanuel I of Italy, by one month, dying in February 1878.