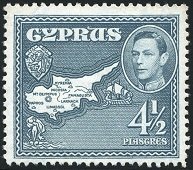 The historically strategic island of Cyprus is located in the Mediterranean Sea, South of Turkey, Southeast of Greece, and North of Egypt.  This strategic location has played a significant role in Mediterranean history for over 30 Centuries!

The island of Cyprus, though previously inhabited from Neolithic times, was formally settled by Mycenaean (Bronze Age) Greek traders during the 2nd Millennium B.C.  The Greek word, Κύπρος or Kýpros, is believed to be derived from the ancient Sumerian word for "copper", as the island was a major source of copper / bronze during antiquity.

Cyprus plays a principle role in Greek Mythology, as it is considered the birthplace of both Aphrodite and Adonis.

Persian Standard Gold Stater of Salamis
From the Reign of Evagoras II (361-351 B.C.)
Obverse: Lion with Eagle on its Back, Reverse: Artemis Drawing Bow

Between 708 B.C. and 333 B.C., the island was under the successive control of the Assyrian Empire, the Egyptian Empire, and then the Persian Empire.

Gold Stater of Kition c. 325-320 B.C.
From the Reign of Pumiathon (362-312 B.C.)
Style and Type of Alexander the Great
Obverse: Helmeted Head of Athena, Reverse: Nike Standing to the Left.

Alexander the Great, during his conquest of the Persian Empire, seized the island in 333 B.C.    Following his death, the island part of the Hellenistic Empire of Ptolemaic Egypt, and it remained under Hellenistic rule, until it was taken over by the Roman Republic in 58 B.C.

During most of the 1st Millennium A.D., the island was under the successive control of the Roman Republic, Roman Empire, Byzantine Empire, Lusignan French Aristocracy, the Republic of Venice, and then the Ottoman Empire. 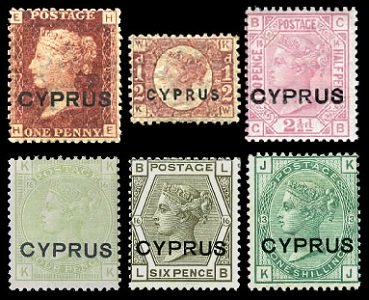 The First Postage Stamps of Cyprus (1880)

In 1878, following the end of Russo-Turkish War and the conclusion  of the Congress of Berlin, the island was made a Protectorate of the British Empire, in exchange of guarantees that Great Britain would use the island as a base to protect the Ottoman Empire from further aggression by Russia.  During the early 20th Century, the island would serve as a major military base, protecting Great Britain's colonial trade routes. 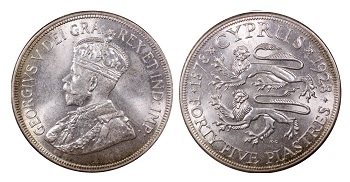 With the outbreak of World War I in 1914, Great Britain formally annexed the island of Cyprus, and in 1925, the island officially became a Crown Colony.  The island would continue to serve as an important British military base, throughout the first half of the 20th Century.  On August 16, 1960, Cyprus became an independent republic.

As far as the scope of this website, classical and early modern postage stamps, all of the postage stamps of Cypress, from 1880 to 1960, were issued during the British administration of Cypress.  Links to content pages for those issues will appear at the top of column three of this category page.

Return to Home Page from
Island of Cyprus