The first commemorative Iceland stamps appeared in 1911, celebrating an Icelandic-born Danish statesman and author, whom they consider as being the father of their independence movement.  However, Iceland philatelists, to this day, consider the greatest commemorative stamps of this island nation as being the massive millennium sets issued in 1930. 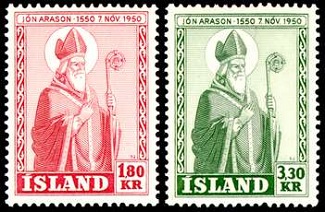 The two pictorial Iceland stamps shown above (Sc. #269-270) were issued on November 7, 1950 to commemorate the 400th Anniversary of the Death of Bishop Jon Arason.

Jon Arason (1784-1550) was an Icelandic Roman Catholic bishop who was executed for his struggle against the imposition of the Protestant Reformation in Iceland. 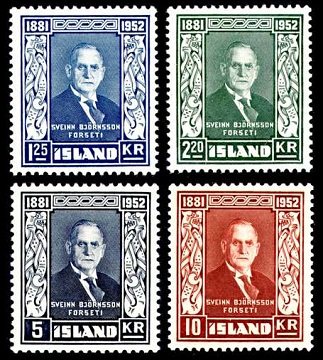 The four commemorative stamps of Iceland shown above (Sc. 274-277) were issued on September 1, 1952 to honor Sveinn Bjornsson, the first president of the Republic of Iceland. 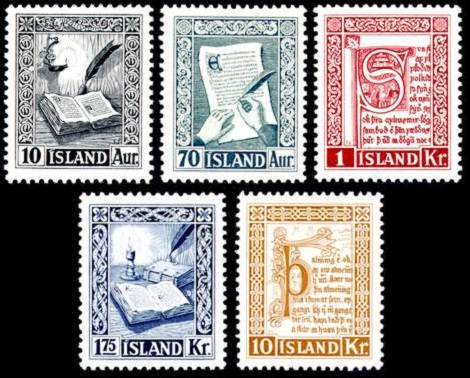 The three portrait stamps of Iceland shown above (Sc. #284-286) were issued on June 1, 1954 to commemorate the 50th Anniversary of the Appointment of the First Native Minister (Hannes Hafstein) to Denmark.

Hannes Hafstein (1861-1922) was an Icelandic politician and poet.  In 1904, he became the first Icelander to be appointed to the Danish Cabinet, as the Minister for Iceland. 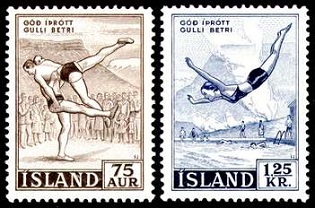