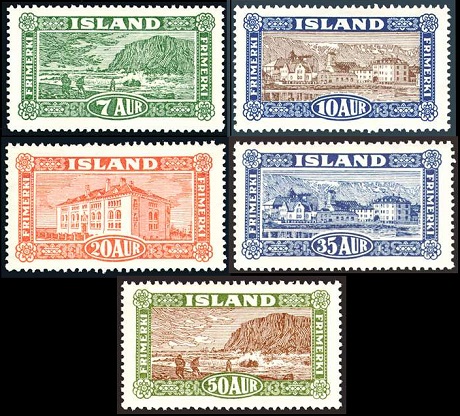 The five large-format pictorial definitive stamps shown above were issued on September 12, 1925.

The catalog attributes and stamp designs are as follows: 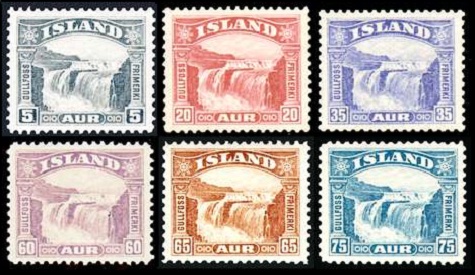 The six small-format pictorial definitive Iceland stamps shown above were issued between December 1931 and May 1932.

The common design of these six stamps (Sc. #170-175) features the Gullfoss or Golden Falls, located on the Hvita River in Southwestern Iceland. 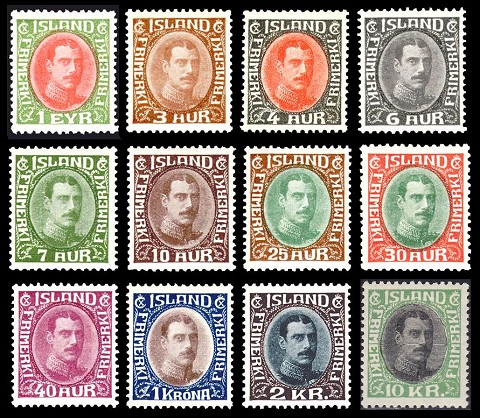 On the re-drawn stamps, the horizontal lines of the portrait and the oval are closer together than on the 1920 stamps, and they are crossed by many fine vertical lines.

High denomination definitive Iceland stamps, with revenue cancellations consisting of a boxed "TOLLUR", were used to pay the import fees on parcels arriving in Iceland.  Stamps with these revenue cancels are only worth a small fraction of the same stamps with postal cancellations.

The two small-format pictorial definitive stamps shown above were issued on June 28, 1935.

The catalog attributes and stamp designs are as follows: