The definitive Iceland stamps of 1920 to 1930 feature portrait issues for a new monarch and many re-valued definitive postage stamps, necessitated by periodic shortages of certain definitive stamp denominations.

Two paper watermarks were used for the stamps of Iceland between 1920 and 1926, and they are shown above.  They will be referred to by their WMK numbers in the text descriptions below. 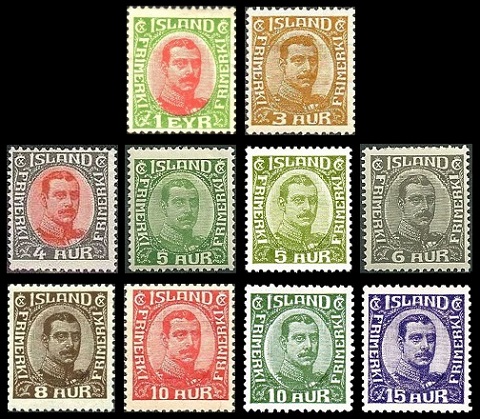 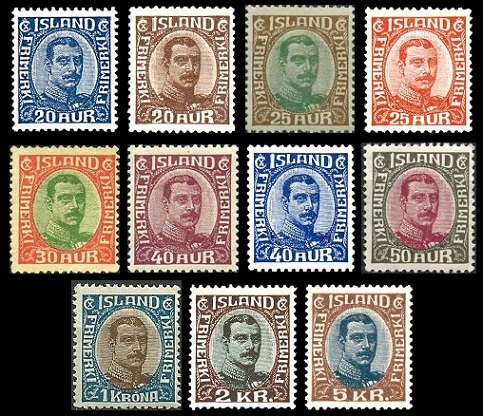 The twenty-one portrait definitive Iceland stamps shown above were issued between 1920 and 1922.  They are all printed on paper with WMK 114, and they are perforated 14 x 14 1/2.

These portrait definitives feature a portrait of King Christian X of Denmark. 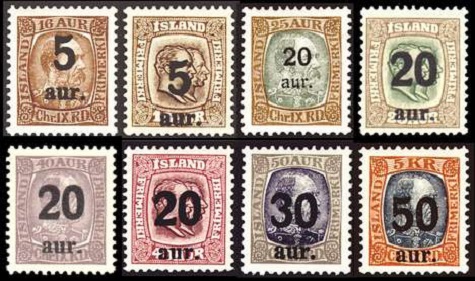 The eight overprinted and re-valued Iceland stamps shown above were issued between 1921 and 1925.

The catalog attributes, presented in the order shown in the image above, are as follows:

The four overprinted and re-valued Iceland stamps shown above were issued between 1924 and 1930.

The catalog attributes, presented in the order shown in the image above, are as follows:

High denomination definitive Iceland stamps, with revenue cancellations consisting of a boxed "TOLLUR", were used to pay the import fees on parcels arriving in Iceland.  An example is shown above.  Stamps with these revenue cancels are only worth a small fraction of the same stamps with postal cancellations.