All of the definitive Greenland stamps, beginning in 1969, are larger, wide-format stamps, allowing for much better artistic detail in the depiction of their subjects.   The pictorial definitive postage stamps of this period feature some of Greenland's stunning Arctic scenery and indigenous Arctic wildlife, and a large portrait definitive stamp series of this period honors the accession of a new Danish monarch. 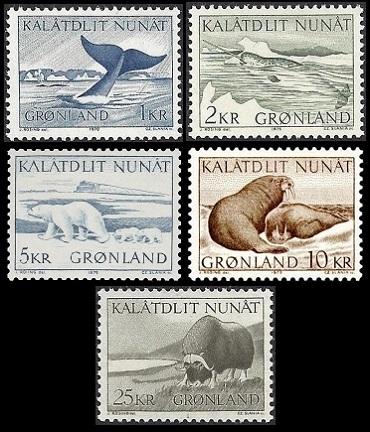 The five new high-denomination pictorial definitive Greenland stamps shown above were issued between 1969 and 1976. 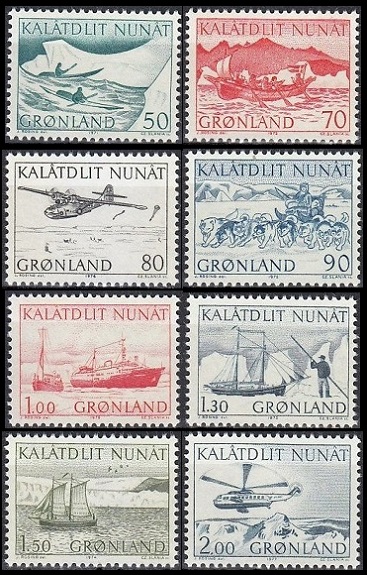 The eight new pictorial definitive Greenland stamps shown above were issued between 1971 and 1977.

As a portent of future events to come, the Danish constitution had been amended in 1953.  The Danish Act of Succession of March 21, 1953, allowed for a female to inherit the throne of Denmark.  King Frederick IX and Queen Ingrid only had three children, and they were all daughters. 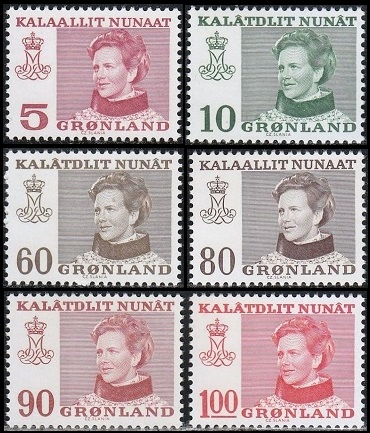 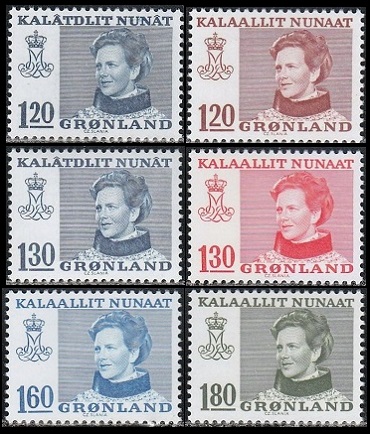 The twelve new definitive postage stamps shown above, featuring a portrait of Queen Margrethe of Denmark, were issued between 1973 and 1979.

During 1989, the 10 Ø. denomination was re-issued in emerald, and the 01 K. denomination was re-issued in carmine.  These shades are much scarcer than those of the original issues. The background lines on these re-issues are irregular, whereas the background lines on the original issues are sharp and complete.

The 10 Ø. denomination and the 01 K. denomination were also issued in booklets, containing panes of ten stamps.  A pane is illustrated above.