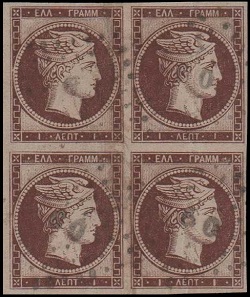 Classical Greek stamps first appeared in 1861.  A used Block of the 1861 Paris Printing of the 1 Lepta denomination is shown above.

Plates identical to those of the classic 1849 Ceres Head postage stamps of France were used for the first stamps of Greece, with the only difference being in the Greek inscriptions and in the vignettes showing the profile of Hermes, instead of the profile of Ceres.  Hermes (Roman: Mercury) was the ancient Greek messenger of the Olympian gods, a very appropriate personification for the first adhesive letter postage stamps of Greece. 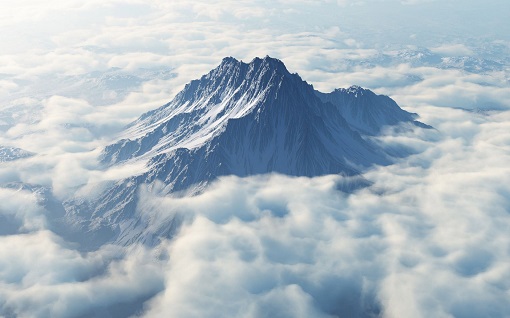 Mt. Olympus
The Home of the Gods in Antiquity

The city states of the ancient Greek World dominated the Mediterranean for many centuries before the rise of the Roman Republic and the Roman Empire.  The Greek culture and language had an enduring influence on the Ancient World, and it continues, around the globe, to this day.   One may consider ... Most of the text content of this website is written in words that are derived from either the Greek or Latin languages.

The Greek stamps shown above picture some of the artistic and architectural treasures of 3,000 years of Greek culture and history.

Many thematic collections could be based solely on the stamps of Greece, such as history, archeology, mythology, art, sculpture, and famous leaders.  Resulting from the tremendous effect of Greek history on Western civilization, just about every country on earth has issued stamps, in one form or another that depict Greek mythological characters, heroic leaders, philosophers, playwrights, poets, physicians, scientists, and artisans ... The thematic possibilities are almost endless!

It is quite a legacy that the works of Greek philosophers, writers, and scientists that died over 2,500 years ago are still relevant and are still
studied in universities around the world today.

For the philatelist, the classical early Hermes Head stamps of Greece come in many shades and varieties that can lend themselves to a multifaceted philatelic study.

The later pictorial stamps of Greece reflect the country's astounding past, and they can become the basis for an incredible single-country collection, with very little cost involved.

Historical articles and reviews of the postage stamp issues of Greece will eventually appear in the link section at the top of the third column of this page.