In October 1933, the German airship Graf Zeppelin made an appearance at the Century of Progress International Exhibition in Chicago.

The two United States stamps shown above (Sc. USA #728-29) were issued to publicize the Century of Progress International Exhibition and to celebrate the 100th Anniversary of the City of Chicago. The One Cent depicts Fort Dearborn and the Three Cent depicts the modernistic Federal Building. 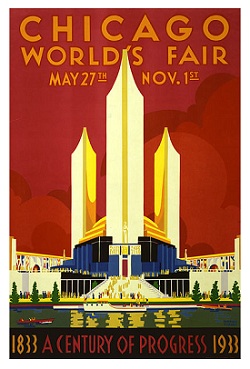 A Century of Progress International Exposition was the name of the World's Fair held in Chicago, from 1933 to 1934, to celebrate the 100th anniversary of the city. The theme of the fair was technological innovation. Its architectural symbol was the Sky Ride, a transporter bridge perpendicular to the lakeshore on which one could ride from one side of the fair to the other. One of the many contemporary posters for the fair is shown at the left.

One of the highlights of the 1933 World's Fair was the arrival of the German airship Graf Zeppelin on October 26, 1933. After circling Lake Michigan near the exposition for two hours, Commander Hugo Eckener landed the 776-foot airship at the nearby Curtiss-Wright Airport in Glenview. It remained on the ground for twenty-five minutes, then it departed for Akron, Ohio.

While the airship's appearance was one of the highlights of the Chicago Fair, the swastika-emblazoned port tail-fin of the ship, representing the new government of the Third Reich, triggered strong political feelings, especially among German-Americans.

Commander Eckener took the airship on a fly-over around Chicago, to show the beautiful ship to the residents of the city. Being sensitive to the current political feelings, he was careful to fly a clockwise pattern so that residents would see only the tricolor Weimar Germany flag on the starboard fin, and not the swastika flag painted on the port fin, which had been done under new regulations of the German Air Ministry. 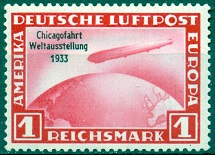 On September 25, 1933, the German government issued a new set of zeppelin stamps, utilizing the existing stocks of the Weimar Republic zeppelin issues of 1928-1931. The new stamps, shown above (Mi. Deutschland #496-98, Sc. Germany #C43-45), were overprinted in black (1 Rm.) or in brownish black (2 Rm., 4 Rm.) with Chicagofahrt Weltausstellung 1933 or Chicago World Exhibition Flight 1933. The characteristics of these stamps are identical to the original 1928-1931 issues.

After initial opposition by the United States Post Office, and President Franklin Roosevelt’s rejection of the idea of another expensive zeppelin stamp, the U.S. Post Office agreed to issue the new stamp. At the end of the airship's last flight to South America, in October 1933, the ship detoured through the United States, for stops in Miami, Akron, and Chicago.

After agreeing on the joint stamp issue with the Germans, the U.S. Post Office issued the stamp shown above (Sc. USA #C18) on October 2, 1933, for use on mail carried by the Graf Zeppelin on its trip through the United States, and then on its return flight to Germany.

The new stamp had the same dimensions and printing characteristics as the previous three zeppelin stamps issued in 1930. The new 50 Cent stamp depicted the Graf Zeppelin over the ocean, with the Federal Building, in Chicago, on the left, and the airship's hangar, in Friedrichshaven on the right. The inscription reads A CENTURY OF PROGRESS FLIGHT.