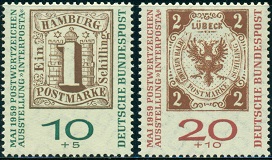 The two surtaxed Germany stamps shown above (Mi. #310-11, Sc. #B366-67) were issued on May 22, 1959 to publicize the International Postage Stamp Exhibition, INTERPOSTA, in Hamburg, and to commemorate the 100th Anniversary of the Postage Stamps of Hamburg and Lübeck.

The surtax provided for Vacations for the Children of Berlin.

There were two printings of these stamps, the first on May 22, 1959 and the second on August 22, 1959.  The colors of the inscriptions are slightly different between the two printings.

The most valuable relic in the Cathedral of Trier is the Holy Robe, the tunic of Jesus Christ.  Helena (246-330), the mother of Constantine the Great (272-337), is said to have discovered the robe in the Holy Land in 327.  Before her death, she had it sent to Constantine in Trier, where he was living at the time. 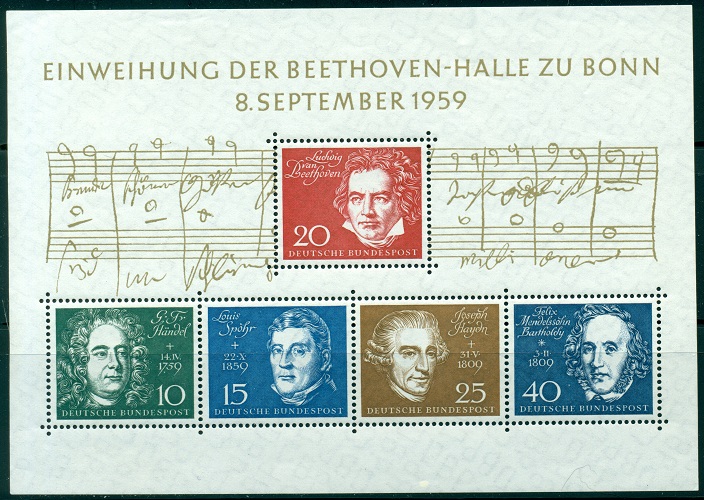 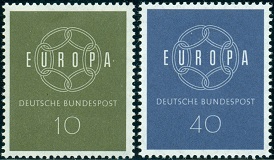 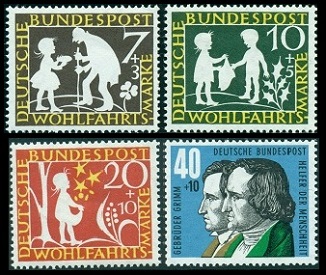 The four surtaxed Republic of Germany stamps shown above (Mi. #322-25, Sc. #B368-71) were issued on October 1, 1959.  These were the first in an on-going annual series of surtaxed postage stamps for Public Welfare, featuring scenes from various Fairy Tales by the Brother's Grimm.

These designs feature scenes from the Fairy Tale, "Star Dollars", by the Brothers Grimm.  The descriptions are as follows: