Wilhelm Busch (1832-1908) was a humorist, poet, illustrator, and painter.  He is best remembered for his 1865 illustrated publication of Max and Moritz -- A Story of Seven Boyish Pranks which is a humorous tale, told entirely in rhymed couplets.  Max and Mortiz, along with subsequent comic adaptions, are still very popular in German-speaking countries to this day. 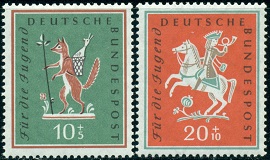 The two surtaxed pictorial Germany stamps shown above (Mi. #286-87, Sc. #B360-61) were issued April 1, 1958, featuring the theme For the Children, featuring illustrations of Folk Songs.  The surtax financed Children's Study Trips to Berlin. 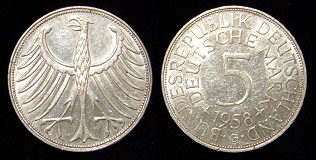 The design of this 20 Pf. denomination stamp features the heraldic eagle from the obverse side of a silver Five Mark coin, as shown in the image directly above. 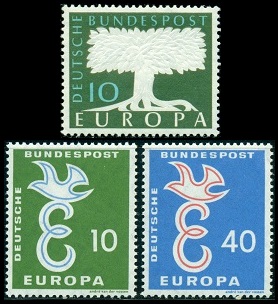 
The two Germany stamps shown above, at the bottom (Mi. #295-96, Sc. #790-91), were issued on September 13, 1958 to celebrate EUROPA (United Europe).  These two stamps were printed on watermarked paper, and their designs feature a dove of peace above a large, script letter "E". 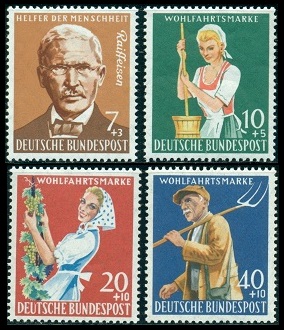 Their designs feature the theme of Agriculture, and their descriptions are as follows:

Rudolf Diesel (1858-1913) was a German inventor and mechanical engineer, best remembered for the invention of the Diesel Engine.