The design features the Coat of Arms of Saar.

Heinrich Hertz (1857-1894) is the famous German physicist that made possible the development of radio, television, and radar by proving that electricity can be transmitted in electromagnetic waves.

The two surtaxed pictorial Germany stamps shown above (Mi. #250-51, Sc. #B354-55) were issued February 1, 1957, featuring the theme Youth Activities.  The surtax provided for Vacations for the Children of Berlin.

The design features the Arms of Aschaffenburg, circa 1332. 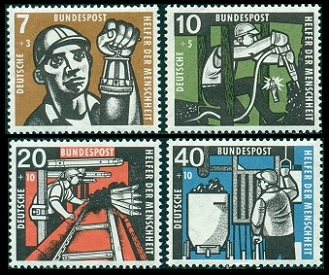 Their designs feature the theme of Coal Mining, and their descriptions are as follows:

The design features the facade of the Assembly Building in Stuttgart.

The design features a tulip and a post horn.

The design is from a Medieval manuscript depicting scholars.

The design features a modern passenger-freighter.

The design features the Liebig Laboratory.