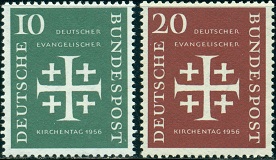 The two commemorative Germany stamps shown above (Mi. #235-36, Sc. #744-45) were issued on August 8, 1956 to celebrate German Evangelical Church Day and to publicize the Meeting of German Evangelical Protestants at Frankfurt-am-Main during August.

The stamp design features a line drawing of the Benedictine abbey, located on Lake Laach, near Andernach, in the Rhineland-Palatinate.  Its original name, "Laach Abbey", translates to "Lake Abbey", denoting the abbey's physical location.

The design features a pigeon holding a letter.  This celebration of stamp collecting is held annually, to encourage public interest in philately. 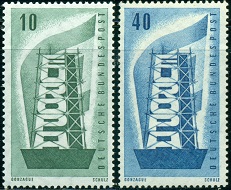 The two tall-format Germany stamps shown above (Mi. #241-42, Sc. #748-49) were issued on September 15, 1956 to celebrate the economic Cooperation between the member countries of the European Coal and Steel Community.

The design features a symbolic reference to the Rebuilding of Europe.

These 1956 European Community stamps gave birth to a new thematic philatelic specialty, "EUROPA", and to this date, every member country of the modern day European Union issues a set of EUROPA stamps each year. 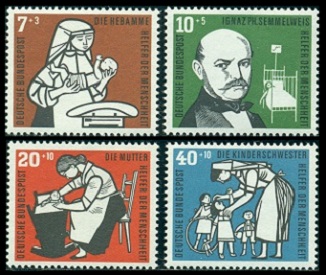 Their designs feature the theme of Child Welfare, and their descriptions are as follows:

The 20 Pf. denomination stamp shown above (Mi. #240, Sc. #751) was issued September 1, 1956 for the International Police Exhibition in Essen during September.

The 10 Pf. denomination stamp shown above (Mi. #248, Sc. #753) was issued on November 17, 1956 in memory of the People of Germany that Died during World War II and to promote the Society for the Care of Military Cemeteries.