Republic of Germany stamps issued during 1954 and 1955 were primarily commemorative postage stamps and surtaxed pictorial stamps for charity.  A special commemorative issue during 1955 also celebrated the re-establishment of Lufthansa Airlines and the resumption of German domestic and international airline flights.

The design is from a woodcut by Jost Amman (1539-1591), showing a 15th Century printer, using the Gutenberg printing press.

The design features a sword and a Bishop's Miter. 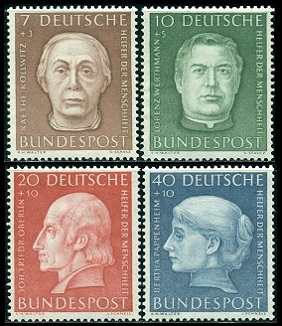 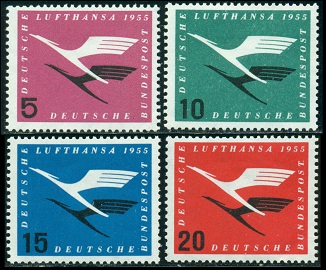 The four commemorative Republic of Germany stamps shown above (Mi. #205-208, Sc. #C61-64), featuring the Lufthansa logo, were issued on March 31, 1955 to celebrate the post-war re-establishment of Lufthansa Airlines and the resumption of German domestic and international air travel. 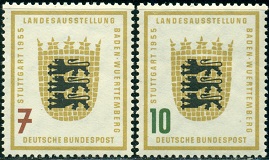 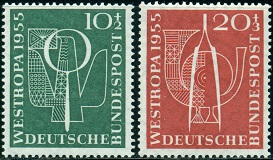 The two surtaxed stamps shown above (Mi. #217-18, Sc. #B342-43) were issued on September 14, 1955 to publicize the WESTROPA 1955 International Philatelic Exhibition in Düsseldorf.  The surtax benefited the Society of German Philatelists.

The two designs feature a magnifying glass and stamp tongs. 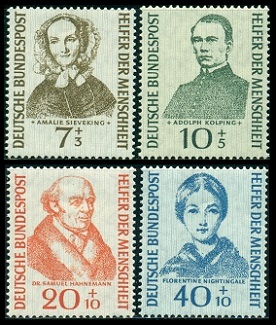 He was a German engineer and the founder of the German Museums of Science and Technology in Munich.

The design features a motor-bus of 1906.

It was the victory in the Battle of Lechfeld, in August 955, that King Otto I decisively halted the Hungarian (the Huns) incursions into Western Europe.  After the battle, the German lords proclaimed Otto their emperor.  Later, Otto went to Rome, where he was proclaimed the Holy Roman Emperor by Pope John XII.