Republic of Germany stamps issued during 1952 and 1953 were primarily commemorative postage stamps and surtaxed pictorial stamps for charity.  The stamps of this era feature anniversaries of famous people and events, but they also showcase the emerging infrastructure of the new, democratic Germany, in the wake of the complete devastation that existed just a little over six years earlier.

The 5 Pf. denomination stamp shown above, at the left (Mi. #148, Sc. #687), was issued on April 15, 1952 to commemorate the 500th Anniversary of the Birth of Leonardo da Vinci, the Italian renaissance painter, engineer, and inventor.

The design shows the World famous painting, Mona Lisa, by Leonardo da Vinci (1452-1519).  The painting is a portrait of Lisa del Giocondo (1479-1551), a member of the Gherardini Family of Florence Italy, and it  was commissioned by her husband, Francesco del Giocondo (1465-1538), a successful Florentine cloth and silk merchant of the time.

The design features the Nuremberg Madonna, a 16th Century statue by an unknown sculptor, which is in the museum.

Carl Schurz (1829-1906) was a renowned German journalist and revolutionary.  In 1852, he immigrated to the United States, where he became a highly regarded journalist, orator, and statesman. 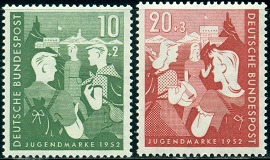 The stamps are inscribed "JUGENDMARKE 1952" or "YOUTH STAMPS 1952", and the surtax benefited the youth programs. 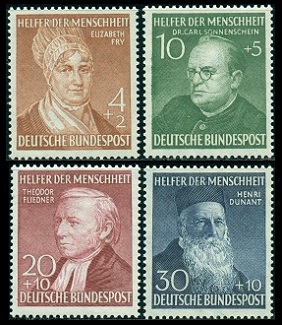 The design features the portrait of Johann Philipp Reis (1834-1874), a German scientist and inventor, who constructed the first working telephone in Germany.

This somewhat morbid design, a mother with her injured child in front of a traffic sign, does get the message across rather well.

The four smaller-format commemorative Germany stamps shown above (Mi. #167-70, Sc. #698-01) were issued on June 20, 1953 to publicize the Transport and Communications Exhibition held in Munich. 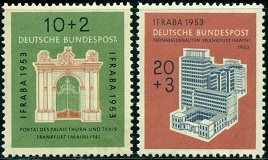 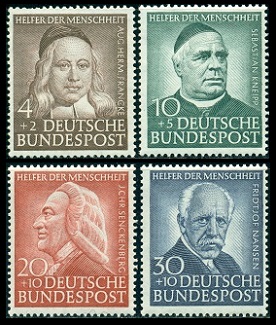 The design features the portrait of Nikolaus Otto (1832-1891), the German engineer responsible for the first internal-combustion engine to burn fuel directly in a piston chamber.

The design features a fishing ship near Helgoland.

The design features a painting of a Thurn & Taxis Postilion circa 1846.

Justus von Liebig (1803-1873) was a German chemist who made major contributions to agricultural and biological chemistry.  He is considered the founder of organic chemistry.