Prior to the North German Confederation, German States stamps were issued by most of the separate Germanic kingdoms, duchies, free-cities, etc. of Northern Europe.

Saxony is known as Sachsen in German and Sakska in Sorbian. Both Sorbian and a Sorbian dialect of German are spoken there. Located in the southeastern part of present-day Germany, its history spans more than a millennium. It was a medieval duchy, an electorate of the Holy Roman Empire, and a kingdom until 1918. Under the Holy Roman Empire, the Elector of Saxony was also the King of Poland.

During the Austro-Prussian war, an ally of Austria at the time, Saxony was occupied by Prussia. Saxony afterward became part of the North German Confederation and subsequently fought alongside Prussia during the Franco-Prussian War in 1870. In 1871, the Kingdom of Saxony joined the newly formed German Empire. 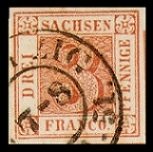 The first stamp of Saxony, issued in 1850, shown above (Mi. #1, Sc. #1), is one of the rarest of classical European stamps. A low quantity of them were issued and used at the time, as 3 Pf. was the newspaper rate. Many of the stamps were destroyed, as a result of being used to seal newspaper wrappers. An estimated 3,000 to 4,000 copies are thought to exist today, and many of them are repaired. This is also one of the most forged of the classical European stamps, most notably by Fournier.

In 1851, another 3 Pf. stamp was issued (Mi. #2, Sc. #2), this time, showing the Saxony coat of arms. Though not very scarce, they are very difficult to find in good condition, with nice margins all around.

The four portrait definitive stamps shown above (Mi. #3-7, Sc. #3-8), were issued between 1851 and 1852, and they are actually the first stamps issued by the Kingdom of Saxony that were intended for use on letter mail. The set features a right-profile bust of King Frederick Augustus II, and the designs are engraved on colored,  unwatermarked paper.

In 1864, a new set of typographed stamps, with an embossed coat of arms, was issued, as shown above (Mi. #14-19, Sc. #15-20). The stamps are rough-perforated 13. All of them come in many shades, and can make a philatelic sub-specialty in themselves, especially in combination with a German States stamps postmark collection.


In 1868, the stamps of Saxony were replaced by those of the North German Confederation.