Both new stamp denominations are lithographed on medium thick paper with the serpentine wave watermark, and they are imperforate.  The gum on mint stamps ranges from brownish yellow to whitish.

There were EIGHT printings of the imperforate 1 ¼ Schilling denomination, with the stamps being produced in distinctly different colors.  They are ALL shown in the images above.

This is just incredible, considering these imperforate stamps were only in use for about 6 months, when they were replaced by new, perforated stamps in August 1864!

The catalog attributes, for the printings and shades, are as follows:

There was only one printing of the imperforate 2 ½ Schilling denomination.  The shades range from Dark Opal Green to Dark Bluish Green.  An example is shown in the image above (Mi. #9, Sc. #12).

The spacing between the positions on the printing plates was 2.6 mm vertically and 2.8 mm horizontally.  The Michel catalog recommends collecting these imperforate stamps with at least one of the horizontal and one of the vertical margins being equal to or exceeding 1.5 mm, or showing portions of one vertical separator line and one horizontal separator line.  THIS IS VERY IMPORTANT!

These same plates were used to print the same line perforated 13 ½ stamp denominations of 1864 - 1867.  Many people, over the years, have trimmed the perforations off these stamps and have represented them as being the 1864 imperforate issues.  These two imperforate stamps were in use for a very short period of time, and examples of them are worth FAR MORE than the perforated stamps.

Thus, any of these German states stamps for the Free City of Hamburg, not exhibiting the conditions noted above, are very likely the 1864 - 1867 perforated stamps that have been trimmed to resemble the two 1864 imperforate stamps.

There ARE private reprints of #8 P 1 and of #9 P 1.  PLATING is REQUIRED for authentication.

Generally speaking, if one of the two imperforate stamps, issued in early 1864, shows a watermark, and it has ample margins, it is probably authentic.  Though this presumption is widely accepted, it can, in some cases, be a dangerous practice.

To make things a lot more technical here, each of the two 1864 imperforate stamps has plate characteristics that are NOT PRESENT on the forgeries and reprints.  Some people refer to these as secret marks, but this is a misnomer, as they were not intentionally placed there by the plate engravers.

Drawings of the plating characteristics of the 1 ¼ Schilling and the 2 ½ Schilling denominations are shown in the graphic images below.

These attributes are also applicable to the perforated 13 ½ stamps of these same denominations issued between late 1864 and 1867.

Many private reprints exist of these two imperforate stamp denominations, most of them having been manufactured by the infamous Hamburg stamp dealer / wholesaler, Julius Goldner. 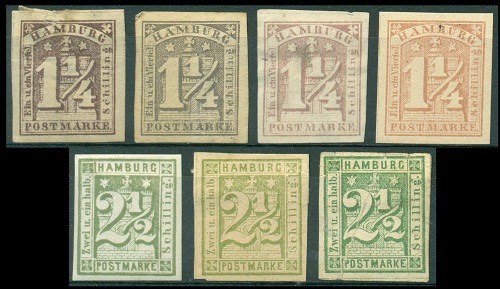 The vast majority of the private reprints are printed on papers of varying thickness and colors, and they are unwatermarked.  The rare watermarked reprints do not have the same plating characteristics (secret marks) that are found on the original stamps.

For additional specialized research .... The Postage Stamps of Hamburg, Bremen, Lubeck and Bergedorf by Dr. Georges Brunel  is available on CD through Amazon.com.  The highlights of this book include enlarged drawings and detailed descriptions of the varieties and marks found only on the genuine stamps. There are chapters on the reprints and forgeries of the stamps of each state, explaining how they can be distinguished from the genuine stamps. Around 100 illustrations. 41 pages.


Return to German States Stamps from
Hamburg - Issues of Early 1864