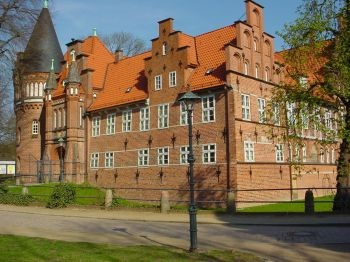 German States stamps for the postal district of Bergedorf were issued in 1861. 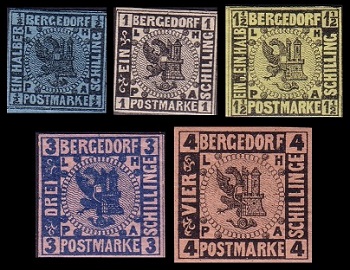 The five German states stamps of Bergedorf shown above were issued on November 1, 1861.  A later printing of the 1/2 S. denomination on dark blue paper was made in 1867.  They are lithographed, on colored, unwatermarked paper, and they are imperforate. 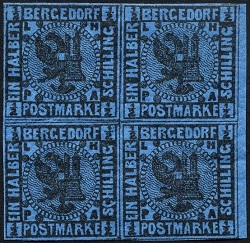 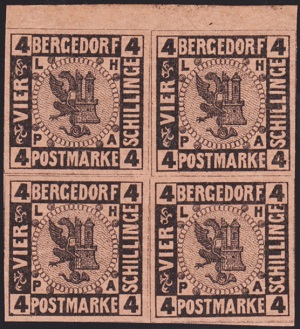 Hamburg's stamps were officially sold alongside those of Bergedorf at the post office counters, so very few of the Bergedorf postage stamps were actually ever used. As a result, supplies of the originals, including multiples, are relatively common today.

The original printings, in mint condition, sell for between 10 and 50 Euros each. Modern reprints are plentiful, and those are worth about 5 Euros each on today's market.

For details on how to identify the originals, reprints, and cancellation types, please refer to the major specialized catalogs and to the Serrane Guide.

Since most of the stamps sold and used in Bergedorf were those of Hamburg, USED Bergedorf stamps are VERY RARE. It can be safely assumed, with any off-cover, non-certified, used Bergedorf stamp anyone should encounter today, that the cancellation is probably FAKE!


BE VERY CAREFUL when buying any Bergedorf stamps, and those of Lübeck or Hamburg as well, especially if they do not have BPP authentication markings or certificates of authenticity.